pronunciation  (Urdu: اشفاق الله خان‎ (22 October 1900 – 19 December 1927) was a freedom fighter in the Indian independence movement who had sacrificed his life along with Ram Prasad Bismil. Bismil and Ashfaq were good friends and Urdu poets (Shayar). Bismil was the pen name of Pandit Ram Prasad whereas Ashfaq used to write poetry with the pen name of 'Hasrat'.

Ashfaqulla Khan was hanged in a conspiracy against the British Raj in the twentieth century. He was a prominent figure of the Hindustan Republican Association.[1]

Ashfaqullah Khan was born on 22 October 1900 in Shahjahanpur in Uttar Pradesh. His father, Shafiq Ullah Khan belonged to a Mughal family which was famous for their military background. His maternal side was of the family was better educated and many of those relatives had served in the police and administrative services of British India. His mother Mazhoor-Un-Nisa Begum was an extremely pious lady. Ashfaqullah was the youngest amongst all his four brothers. His elder brother Riyasat Ullah Khan was a class mate of Pandit Ram Prasad Bismil. When Bismil was declared absconder after the Mainpuri Conspiracy, Riyasat used to tell his younger brother Ashfaq about the bravery and shayari of Bismil. Since then Ashfaq was very keen to meet Bismil, because of his poetic attitude. In 1920, when Bismil came to Shahjahanpur and engaged himself in business, Ashfaq tried so many times to contact him but Bismil paid no attention.

In 1922, when Non-cooperation movement started and Bismil organised meetings in Shahjahanpur to tell the public about the movement, Ashfaqullah met him in a public meeting and introduced himself as a younger brother of his classmate. He also told Bismil that he wrote poems under the pen-names of 'Warsi' and 'Hasrat'. Bismil listened to some of his couplets in a private get-together at Shahjahanpur and they became good friends. Ashfaq often wrote something and showed it to Bismil who immediately corrected or improved the same. Thus a very good poetic alignment between Ashfaq and Bismil developed and it was so familiar that whosoever listened to them in any of the poetic conferences called Mushaira in Urdu language was overwhelmed with surprise.

When Mahatma Gandhi withdrew the Non-Cooperation Movement after the Chauri Chaura incident in 1922, so many Indian youths were left dejected.[1] Ashfaq was also one of them. He felt that India should become free as soon as possible and so he decided to join the revolutionaries and also win the friendship of Pandit Ram Prasad Bismil, a famous revolutionary of Shahjahanpur.

Pandit Ram Prasad Bismil, an active member of Arya Samaj, never bore in mind any prejudice against any religious community. This was the only reason behind it that won the heart of Ashfaq and he became a confident friend of Bismil.Ashfaq was a devout Muslim and together with "Bismil" had the common objective of a free and united India. They sacrificed their lives on the same day of 19 December 1927 as martyrs for India, but in different jails[1] of Faizabad and Gorakhpur.

The revolutionaries felt that soft words of non violence could not win India its Independence and therefore they wanted to make use of bombs, revolvers and other weapons to instill fear in the hearts of the Britishers living in India. Although the British Empire was large and strong yet even just a very few Englishmen could conquer India due to the country's untrained armies and political divisiveness. The withdrawal of the non cooperation movement by so-called leaders of Congress united revolutionaries scattered throughout the country. But the newly started revolutionary movement required money to support its need. One day while traveling on a train from Shahjahanpur to Lucknow Pandit Ram Prasad Bismil noticed every station master bringing money bags into the guard who kept them in a cash chest in his cabin. This cash chest was handed over to the station superintendent at Lucknow junction. Bismil decided to loot the government money and utilise it against the same government which had been continuously looting India for more than 300 years. This was a beginning of Kakori train robbery.

To give a flip to their movement and buy arms and ammunition to carry out their activities, the revolutionaries organised a meeting on 8 August 1925 at Shahjahanpur. After a lot of deliberations it was decided to loot the government treasury carried in the 8-Down Saharanpur - Lucknow passenger train. On 9 August 1925, Ashfaqulla Khan and eight other revolutionaries looted the train under the leadership of Pandit Ram Prasad Bismil. They were Rajendra Lahiri from Varanasi, Sachindra Nath Bakshi from Bengal, Chandra Shekhar Azad from Unnao, Keshab Chakravorthy from Calcutta, Banwari Lal from Rai Bareli, Mukundi Lal from Etawah, Manmath Nath Gupta from Benaras and Murari Lal from Shahjahanpur.

The British Government was astonished at the courage of the revolutionaries. The Viceroy deployed the Scotland Yard to investigate the case. Within a month the C.I.D. collected the clues and decided to arrest almost all of the revolutionaries overnight. On the morning of 26 September 1925, Pandit Ram Prasad Bismil and the others from Shahjahanpur were arrested by the police but Ashfaq was the only one untraced by the police. Ashfaq went into hiding and moved to Banaras, from there he went to Bihar where he worked in an engineering company for about ten months. He also wanted to go abroad and meet Lala Har Dayal for his concrete help in the freedom struggle. He went to Delhi to find out how to move out of the country. In Delhi, he took the help of one of his Pathan friend who in turn betrayed him by informing the police who arrested Ashfaq.

Tasadduk Husain, the then superintendent of police tried to play communal politics between Bismil and Ashfaq. He also tried to win the confidence of Ashfaq by provoking him against "Bismil" but Ashfaq was a strong-willed Indian who surprised the S.P. Tasadduk Husain Khan by saying- "Khan Sahib!, I know Pandit Ram Prasad better than you, he is not such a person as you say but even if you are right then I am also quite sure that as a Hindu, he will be much better than British India to whom you are serving like a servant."[2]

Ashfaqulla Khan was detained in the Faizabad jail. A case was filed against him. His brother Riyasat Ulla Khan deployed Kripa Shankar Hajela, a senior advocate to plea his case as a counsellor. Mr Hajela fought the case till the very end but he could not save his life. While in jail, Ashfaq daily performed Namaz prayer five times reciting the verses from Quran. The case of the Kakori conspiracy was concluded by awarding death sentence to four daredevils, viz., Pandit Ram Prasad Bismil, Ashfaqulla Khan, Rajendra Lahiri and Thakur Roshan Singh. The sixteen others were awarded the rigorous punishment varying from four years up to life sentence.

By an eyewitness account, on a Wednesday, four days before he was hanged, two English officers looked into the solitary cell where Ashfaqulla Khan was lodged. He was in the middle of his namaz. "I’d like to see how much of that faith remains in him when we hang the rat", quipped one of them. But Ashfaq continued his prayer as usual and both of them went away murmuring like a wind's way.

On Monday, 19 December 1927, Ashfaqulla Khan is known to have taken two steps at a time, as he walked up to the post. When his chains were released, he reached for the hanging rope and kissed it by saying these words: "My hands are not soiled with the murder of man. The charges framed against me are a bare false. Allah will give me the justice." And at last he recited in Arabic the shahadah. The noose came around his neck and the movement lost one of its shining stars in the sky.

Ashfaq was a very good Urdu poet who wrote beautiful couplets and ghazals with the pen-name of 'Warsi' and 'Hasrat'. But very few people know that he had also written in Hindi as well as in English. While he was confined in the solitary cell of Faizabad Jail, he started writing a diary. Few words of English are reproduced hereunder from his diary:

In another letter written to his beloved mother, sisters and nephews he writes: "We too had done some of the works which we could, but those were the days, we had the glamour on face and strength in the chest. But now is the hope only hope from you, you are now grown up and we are at the verge of setting like a sun in the west." In Urdu he had written:

Ashfaq is one of the most celebrated persons in Faizabad. Everyone is completely aware of his works. Ashfaq Ullah Khan Memorial Shaheed Shodha Sansthan which was founded back in 1999 in a small village of Faizabad works to spread information about martyrs of India among people. This institution was inspired by works of Ashfaq and Bismil. 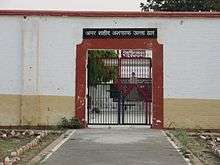 section of Faizabad Jail where Asfaqullah Khan was hanged.

The actions of Ashfaq Ullah Khan and his compatriots have recently been depicted in an Amir Khan starrer hit Bollywood movie Rang De Basanti, where his character role was played by the film actor Kunal Kapoor.[5]