Pritilata Waddedar (5 May 1911 – 23 September 1932)[1] was a Bengali revolutionary nationalist.[2][3] After completing her education in Chittagong and Dhaka, she attended Bethune College in Kolkata. Pritilata graduated in philosophy with distinction.

After a brief stint as a school teacher, Pritilata joined a revolutionary group headed by Surya Sen. She led a team of fifteen revolutionaries[4] in a 1932 attack on the Pahartali European Club,[5][6] which had a sign board that read "Dogs and Indians not allowed".[7] The revolutionaries torched the club and were later caught by the British police. To avoid getting arrested, Pritilata consumed cyanide and died.[8] 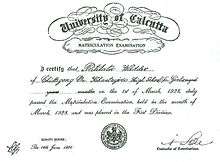 Pritilata was born in a middle-class Vaidya-Brahmin family on 5 May 1911[9] in Dhalghat village in Patiya upazila of Chittagong (now in Bangladesh).[10] Her father Jagabandhu Waddedar was a clerk in the Chittagong Municipality.[2] Her mother Pratibhamayi Devi was a housewife.[11] The couple had six children– Madhusduan, Pritilata, Kanaklata, Shantilata, Ashalata and Santosh. Pritilata was nicknamed Rani.[11] Waddedar was a title conferred to an ancestor of the family who originally had the surname Dasgupta.

Jagabandhu tried to arrange best possible education for their children.[12] He got Pritilata admitted in Dr. Khastagir Government Girls' School of Chittagong. Pritilata was a meritorious student.[13] A teacher in the school, whom students affectionately used called Usha Di, used stories of Rani Lakshmibai to inspire nationalism in her students. Kalpana Datta, a classmate of Pritilata, writes in the biography Chittagong Armoury Raiders– "We had no clear idea in our school days about our future. Then the Rani of Jhansi fired our imagination with her example. Sometimes we used to think of ourselves as fearless...".[14] Arts and literature were Pritilata's favourite subjects.[15] She passed out of Dr. Khastagir Government Girls' School in 1928 and in 1929, got admitted to the Eden College, Dhaka. In the Intermediate examinations, she stood first among all students who appeared in that year's examination from the Dhaka Board.[7][12] As a student in Eden College, she participated in various social activities. She joined the group Sree Sangha, headed by Leela Nag, under the banner Dipali Sangha.[7]

To pursue higher education, Pritilata went to Calcutta (now Kolkata) and got admitted to the Bethune College. Two years later, she graduated in Philosophy from the college with a distinction.[16] However, her degree was withheld by British authorities at Calcutta University. In 2012, she (and Bina Das) were conferred their certificates of merit posthumously.[3]

As a school teacher

After completing her education in Calcutta, Pritilata returned to Chittagong. In Chittagong, she took up the job of headmistress at a local English medium secondary school called Nandankanan Aparnacharan School.[7][12][17]

"Pritilata was young and courageous. She would work with a lot of zeal and was determined to drive the British away."

Pritilata decided to join the Indian independence movement. Surya Sen had heard about her and wanted her to join their revolutionary group.[18] On 13 June 1932, Pritilata met Surya Sen and Nirmal Sen in their Dhalghat camp.[11] A contemporary revolutionary, Binod Bihari Chowdhury, objected that they did not allow women to join their group. However, Pritalata was allowed to join the group because the revolutionaries reasoned that women transporting weapons would not attract as much suspicion as men.[18]

Surya Sen and his revolutionary group decided to kill Mr. Craig, Inspector General of Chittagong. Ramakrishna Biswas and Kalipada Chakravarty were assigned for this task. But they mistakenly killed SP of Chandpur and Traini Mukherjee instead of Craig. Ramakrishna Biswas and Kalipada Chakravarty were arrested on 2 December 1931.[19] After the trial Biswas was ordered to be hanged till death and Chakravarty to be exiled to Cellular Jail.[20]

The family and friends lacked the amount of money required to travel to Chittagong to Alipore Jail of Calcutta. Since at that time Pritilata was staying in Kolkata, she was asked to go to Alipore Jail and meet Ramkrishna Biswas.[20]

Along with the revolutionary group of Surya Sen, Pritilata took part in many raids like attacks on the Telephone & Telegraph offices[9] and the capture of the reserve police line. In the Jalalabad battle, she took the responsibility to supply explosives to the revolutionaries.[2]

In 1932, Surya Sen planned to attack the Pahartali European Club which had a signboard that read "Dogs and Indians not allowed".[21] Surya Sen decided to appoint a woman leader for this mission. Kalpana Datta was arrested seven days before the event. Because of this, Pritilata was assigned the leadership of the attack. Pritilata went to Kotowali Sea Side for arms training and made the plan of their attack there.[12]

They decided to attack the club on 23 September 1932. The members of the group were given potassium cyanide and were told to swallow it if they were caught.[7]

They reached the club at around 10:45 PM and launched their attack. There were around 40 people inside the club then. The revolutionaries divided themselves into three separate groups for the attack. In the club, a few police officers who had revolvers started shooting. Pritilata incurred a single bullet wound. According to the police report, in this attack, one woman with a surname of Sullivan died and four men and seven women were injured.[20] 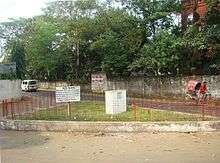 In this place Pritilata committed suicide. Now there is a plaque in her memory

An injured Pritilata was trapped by the British police.[2] She swallowed cyanide to avoid getting arrested.[18] The next day, the police found her body and identified her. On searching her dead body, the police found a few leaflets, photograph of Ramkrishna Biswas, bullets, whistle and the draft of their plan of attack. During the post-mortem it was found that the bullet injury was not very serious and that cyanide poisoning was the cause of her death.[20]

The chief secretary of Bengal sent a report to British authorities in London. In the report it was written–[22]

Pritilata had been closely associated with, if not actually the mistress of, the terrorist Biswas who was hanged for the murder of Inspector Tarini Mukherjee, and some reports indicate that she was the wife of Nirmal Sen who was killed while attempting to evade arrest of Dhalghat, where Captain Cameron fell. 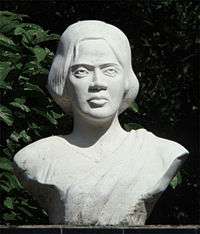 A bust of Waddedar at Pritilata Waddedar primary school, Chittagong

Bangladeshi writer Selina Hossain calls Pritilata an ideal for every woman.[23] A trust named Birkannya Pritilata Trust (Brave lady Pritilata Trust) has been founded in her memory. Pritilata's birthday is celebrated by the trust in different places of Bangladesh and India every year. The trust considers her to be "a beacon of light for women".[24] The last end of Sahid Abdus Sabur Road to Mukunda Ram Hat of Boalkhali upazila in Chittagong has been named as Pritilata Waddedar Road.[25] In 2012, a bronze sculpture of Pritilata Waddedar was erected in front of the Pahartali Railway School, adjacent to the historical European Club.[26][27]