The massacre at the Qissa Khawani Bazaar (the Storytellers Market) in Peshawar, British India (modern day Pakistan) on 23 April 1930 was one of the defining moments in the non-violent struggle of the Indian independence movement. It was the first major confrontation between British troops and non-violent demonstrators in the then peaceful city. Estimates at the time put the death toll from the shooting at nearly 400 dead.[1] The gunning down of unarmed people triggered protests across India and catapulted the newly formed Khudai Khidmatgar movement onto the national scene.[2]

The Khudai Khidmatgar (literally Servants of God), led by Ghaffar Khan, were a group of Pashtuns committed to the removal of British rule through non-violent methods. On 23 April 1930, Ghaffar Khan was arrested after giving a speech in Utmanzai urging resistance to British rule. Ghaffar Khan's reputation for uncompromising integrity and commitment to non-violence inspired most of the local townspeople to take the oath of membership and join the Khudai Khidmatgar in protest.[3]

Simultaneous demonstrations were led by a cross section of civil society in and around Peshawar, led by Maulana Abdur Rahim Popalzai against discriminatory laws like the Frontier Crimes Regulation against the people of the province.

Clashes at the Qissa Khwani bazaar

After other Khudai Khidmatgar leaders were arrested, a large crowd of the group gathered at the Qissa Khwani bazaar. As British Indian troops moved into the bazaar, the crowd was loud and stones were thrown. A British Army dispatch rider was killed and his body burned.[4] Two British armored cars drove into the square at high speed, killing several people. It is claimed that the crowd continued their commitment to non-violence, offering to disperse if they could gather their dead and injured, and if British troops left the square. The British troops refused to leave, so the protesters remained with the dead and injured.[3] At that point, the British ordered troops to open fire with machine guns on the unarmed crowd.[5] The Khudai Khidmatgar members willingly faced bullets, responding without violence. Instead, many members repeated 'God is Great' and clutched the Qur'an as they went to their death.[3] 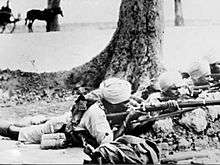 British Indian Army soldiers in Peshawar during the demonstrations

The exact number of deaths remains controversial— official figures give 20 dead[6] while nationalist sources claimed several hundred were killed, with many more wounded. Two platoons of a respected British Indian Army regiment, the Royal Garhwal Rifles, refused to board buses that were to take them into Peshawar for anti-riot duty.[7] A British civil servant wrote later that "hardly any regiment of the Indian Army won greater glory in the Great War (World War I) than the Garhwal Rifles, and the defection of part of the regiment sent shock waves through India, of apprehension to some, of exultation to others."[3] The NCOs of the two platoons involved were sentenced to terms of up to eight years imprisonment.[5]

The violence continued for six hours. Gene Sharp, who has written a study of nonviolent resistance, describes the scene on that day:

When those in front fell down wounded by the shots, those behind came forward with their chests bared and exposed themselves to the fire, so much so that some people got as many as twenty-one bullet wounds in their bodies, and all the people stood their ground without getting into a panic. . . . The Anglo-Indian paper of Lahore, which represents the official view, itself wrote to the effect that the people came forward one after another to face the firing and when they fell wounded they were dragged back and others came forward to be shot at. This state of things continued from 11 till 5 o'clock in the evening. When the number of corpses became too many, the ambulance cars of the government took them away.

In Peshawar and the surrounding area, the Khudai Khidmatgar suffered some of the most extreme suffering of the Indian independence movement. Ghaffar Khan later wrote that this was because the British thought a non-violent Pashtun was more dangerous than a violent one. Because of this, the British did everything they could to provoke them into violence, with little effect.[3]

The British action against the local Indian population created unrest throughout the British Colony of India. This resulted in King George VI (Emperor of India) launching a legal investigation into this matter. The British Commission brought the case forward to Chief Justice Naimatullah Chaudhry, a distinguished Judge of the Lucknow protectorate.

Historical records of Peshawar Archives indicate that like many previous incidents, the British Government decided to mask the Qissa Khawani Bazaar Massacre by bribing the judge. In addition, King George VI also passed a resolution to Knight Naimatullah Chaudhry with the title of "Sir" and "Lord" to gain his favor. In return it was expected that Naimatullah would issue a report supporting the British Troops. However, Naimatullah turned down the offers and he personally surveyed the area of massacre and published a 200-page report criticizing the British on their heinous act and passed a resolution in favor of the local people of Peshawar and N.W.F.P Area. The decision of the judge was hailed by the local populace upon the basis that truth and honesty had prevailed.