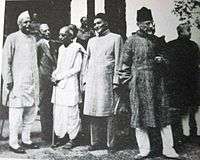 The Simla Conference 1945 was a meeting between the Viceroy and the major political leaders of British India at Simla, India. Convened to agree on and approve the Wavell Plan for Indian self-government, it reached a potential agreement for the self-rule of India that provided separate representation for Muslims and reduced majority powers for both communities in their majority regions.

On June 14, 1945, Lord Wavell announced a plan for a new Executive Council in which all members except the Viceroy and the Commander in Chief would be Indians. This executive council was to be a temporary measure until a new permanent constitution could be agreed upon and come into force. All portfolios except Defence would be held by Indian members.

In October 1943 the British Government decided to replace Lord Linlithgow with Lord Wavell as the Viceroy of India. Before assuming the viceroyalty, Wavell had been head of the Indian army and thus had an understanding of the Indian situation. On becoming Viceroy, Wavell’s most important task was to present a formula for the future government of India which would be acceptable to both Congress and the Muslim League.

In May 1945 Wavell visited London and discussed his ideas with the British Government. These London talks resulted in the formulation of a definite plan of action which was officially made public simultaneously on June 14, 1945 by L.S. Amery, the Secretary of State for India, in the House of Commons and by Wavell in a broadcast speech delivered from Delhi. The plan, commonly known as the Wavell Plan, proposed the following:

1. If all the Indian political parties would agree to help the British war effort, then the British Government would introduce constitutional reforms in India after the war.

2. The Viceroy’s Executive Council would be immediately reconstituted and the number of its members would be increased.

3. In the Council there would be equal representation of high-caste Hindus and Muslims.

4. Other minorities including low-caste Hindus, Shudras and Sikhs would be given representation in the Council.

5. All the members of the Council, except the Viceroy and the Commander-in-Chief, would be Indians.

6. An Indian would be appointed as the member for Foreign Affairs in the Council. However, a British commissioner would be responsible for trade matters.

7. The defence of India would remain in British hands until power was ultimately transferred to Indians.

8. The Viceroy would convene a meeting of Indian politicians including the leaders of Congress and the Muslim League at which they would nominate members of the new Council.

9. If this plan were to be approved for the central government, then similar councils of local political leaders would be formed in all the provinces.

10. None of the changes suggested would in any way prejudice or prejudge the essential form of the future permanent Constitution of India.

To discuss these proposals with Indian leaders, Wavell summoned them to a conference to take place in Simla on June 25, 1945.

The Wavell Plan, in essence, proposed the complete Indianisation of the Executive Council, but instead of asking all the parties to nominate members to the Executive Council from all the communities, seats were reserved for members on the basis of religion and caste, with the caste Hindus and Muslims being represented on it on the basis of parity. Even Mahatma Gandhi resented the use of the words “caste Hindus”.

While the plan proposed immediate changes to the composition of the Executive Council it did not contain any guarantee of Indian independence, nor did it contain any mention of a future constituent assembly or any proposals for the division of power between the various parties of India.

Failure of the Simla Conference

The Muslim League demanded that no other party could nominate a Muslim member to the Council, which would make the League the sole representative of Indian Muslims. Congress, as a national organisation, insisted on having the right to nominate representatives from any of the communities. The conference ended in failure because neither Congress nor the League was prepared to deviate from their respective positions on Muslim representation.

Meanwhile, a general election had been held in the United Kingdom in July 1945 which had brought the Labour Party to power. Labour wanted to transfer power to the Indians as quickly as possible. The new government sent the Cabinet Mission to India and this proved to be the final nail in the coffin of the Wavell Plan.بت₠×∆ərɨ⟨/[unsupported input]/⟩