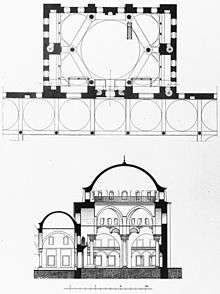 The courtyard is surrounded by the cells of a medrese and a dershane, or main classroom. Attractive apple green and yellow tiles grace the porch, while blue and white ones are found on the east wall of the prayer hall. These tiles date from the mid 16th century. On the three galleries, the wooden ceiling under the west one is elaborately painted in red, blue, gold and black.[1] The mosque is last imperial building in Istanbul to be decorated with expressly designed cuerda seca tilework. Later buildings were decorated with tiles that were painted under a clear glaze.[2]