The square planned mesjid is covered with an octagonal-shaped dome. The mosque has an interesting minaret, which was suspected to be a church bell. In fact, there are no example this type of minaret in the mosque architecture. But this question has not been answered yet.[4] The Minaret, which can be climbed by five stairs, is located circa 10 meter outside of the mosque and is placed over the fountain right across of the entrance.

Veled-i Yaniç was a Sufi whose real name was Mahmut. His father was Hadji Hayruddin, the son of Yaniç. He worked under state service during the reigns of Murad Hudavendigar the first and Yıldırım Bayezid. He was one of the commanders of the Ottoman state, he also combated in the Battle of Ankara. He died probably in the 1450s. He is buried in the courtyard of the mosque which is known by his name. 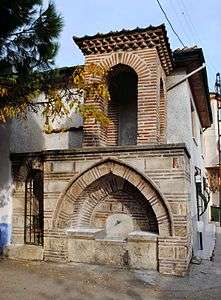 The Minaret of the Veled-i Yaniç Mosque