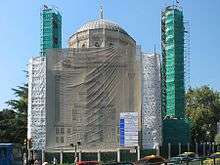 One of the last mosques built in Istanbul during the Ottoman Empire, the Pertevniyal Valide Sultan Mosque was built for the Sultana Pertevniyal, wife of Sultan Mahmud II and mother of Sultan Abdülaziz. It was designed by the Italian architect Montani. The construction work began in November 1869, and the mosque was finished in 1871.[1]

The building is an example of Turkish Rococo with admixture of classical Turkish, Gothic, Renaissance, and Empire styles. It is rather unique in the details of the rock work.