For the mosque in the Üsküdar district of Istanbul, see Mihrimah Sultan Mosque (Üsküdar).

The Mihrimah Sultan Mosque (Turkish: 'Mihrimah Sultan Camii') is an Ottoman mosque located in the Edirnekapı neighborhood near the Byzantine land walls of Istanbul, Turkey. Located on the peak of the Sixth Hill near the highest point of the city, the mosque is a prominent landmark in Istanbul.[1]

The Mihrimah Sultan Mosque was designed by Mimar Sinan ("Sinan the Architect") for the favorite daughter of Suleiman the Magnificent, Princess Mihrimah. Its building took place from 1562 to 1565.[2] The complex has been severely damaged by earthquakes several times (including 1719, 1766, 1814 and 1894), and although efforts were made to restore the mosque, its attendant buildings received less attention. The dome was further damaged during 1999 İzmit earthquake, and required restoration, along with the upper half of the minaret.

The mosque was built on a terrace overlooking the main street. A large courtyard (avlu) whose interior portico is divided into individual cells forming a madrasah surrounds the mosque. In the center of the courtyard is a large ablution fountain (sadirvan). Entry to the mosque is through an imposing porch of seven domed bays with marble and granite columns.[3] The mosque itself is a cube topped by a half-sphere, with symmetrical multi-windowed tympana on each of the four sides. The dome is supported by four towers, one in each corner; its base is pierced by windows. The single minaret is tall and slender; during the 1894 earthquake it crashed through the roof of the mosque. 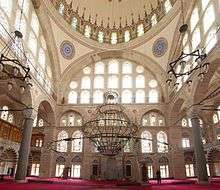 The interior is a cube under a dome 20 metres (66 feet) in diameter and 37 metres (121 feet) high. On the north and south sides, triple arcades supported by granite columns open onto side aisles with galleries above, each with three domed bays. A vast amount of surface area is covered by windows, making the mosque one of the brightest lit of any of Sinan's works. Some of the windows contain stained glass.

The interior stencil decorations are all modern. However, the mimbar in carved white marble is from the original construction.

As built, the Mihrimah Sultan Mosque had a külliye which included (besides madrasah) a double hamman, türbe and a low row of shops under the terrace upon which the mosque was built, whose rents were intended to financially support the mosque complex.

The complex does not include the grave of Mihrimah Sultana herself (which is located at the Süleymaniye Mosque, but a ruined türbe (which is also a work of Sinan) behind the mosque houses the graves of her son-in-law, Grand Vizier Semiz Ali Pasha, daughter Ayşe Hümaşah Sultan, grandsons Mehmed Bey, Sehid Mustafa Pasha and Osman Bey as well as many other members of her family.