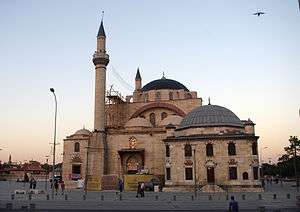 The mosque had been commissioned in 1558 by Selim II while he was still a şehzade (prince) . Although not certain the architect was probably Mimar Sinan. The construction was completed in 1570 after Selim became the sultan. Later it was repaired three times; in 1685, 1816 and 1914.[1]

The double-minaret mosque is a typical 16th century Ottoman mosque and it resembles Fatih Mosque in İstanbul. The praying area is roofed by a big dome. There are seven small domes over the nartex. The mihrab is mede of blue marble and the minbar is made of white marble.[1]