This article is about the mosque in Sinop, Turkey. For other mosques with the same name, see Alaeddin Mosque (disambiguation). 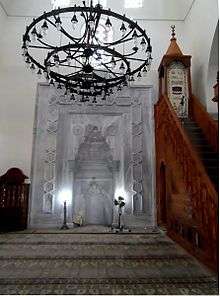 Mihrab of Alaaddin Mosque in Sinop.

Alaaddin Mosque is a historical mosque in Sinop, Turkey

Sinop was an important Black Sea port during the Middle Ages. It was captured by Kaykaus I of Seljuks in 1214. The mosque was commissioned by his brother Alaattin Keykubat I in 1220s. The trustee of the mosque building was Atabeg Esedüddin Ayas a vizier of an Anatolian beylik who escaped from his beylik after a coup d’etat and took refuge in Seljuks. But after Manuel I of Trebizond captured Sinop, most of the mosque was demolished . Turkish control was restored in 1264 and Seljuks vizier Pervâne rebuilt the mosque in 1267. [2] The city fell to Candarid beylik and in 1340s İbrahim of Candarids built a tomb in the north east corner of the mosque yard. In 1385 Bayezit of Candarids enlarged the mosque. Sinop as well as the rest of Candarid lands were captured by the Ottoman Empire in 1460s. [3] During the Ottoman rule several times the mosque underwent maintenance. In 1850s Tufan Pasha, the Ottoman governor of Sinop restored the mosque following an earthquake which damaged the dome. The last restoration of the mosque took place in 2008.

The total area of the mosque is square where the building has 66 x 22 m2 (216 x 72 ft2) base area and the yard has 66 x 44 m2 (216 x 144 ft2) area. The rectangular plan of the mosque building is quite different than the later Ottoman mosques. The mosque yard is encircled by 12 metres (39 ft) high walls. There are three gates; at the west, at the north and at the east. The fountain (a must for a mosque) is in the center of the yard. The mosque has three main domes and two smaller domes. During the restoration in the 1860s, the original marble mimbar of the mosque had been sent to İstanbul. The present wooden mimbar is a later addition.[4]