The Dolmabahçe Mosque is in Istanbul, Turkey. It was commissioned by queen mother Bezmi Alem Valide Sultan. 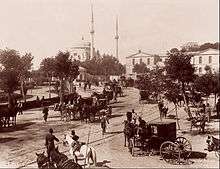 A late 19th Century photograph of the mosque by the Abdullah Brothers.

The mosque's construction was originally backed by Bezm-i Alem Valide Sultan. After she died, Sultan Abdülmecid, her son, continued to support the construction of the mosque. Upon completion in 1855, it was opened for prayer services.[2]