For the "Yeni Valide Camii" near the Galata Bridge in the Fatih district of Istanbul, see New Mosque (Istanbul).

The Yeni Valide Mosque (Turkish: Yeni Valide Camii) is an 18th-century Ottoman mosque in the Üsküdar district of Istanbul, Turkey.

Construction of the Yeni Valide mosque was began in 1708 and completed in 1710. It was built by Sultan Ahmed III in honour of his mother Emetullah Râbi'a Gülnûş Sultan.[1] The complex consists of an imaret (hospice), arasta, primary school, the tomb of Emetullah Râbi'a Gülnûş Sultan, a courtyard shadirvan (fountain), a muvakkithane (clock tower) and offices. The building is typical of the Classical Ottoman period and of the "Sinan School" of Ottoman religious architecture. It is located in the Üsküdar neighborhood of Istanbul. The main part of the building is square-shaped and covered with a flattened main dome and four half domes. The mosque has two minarets with two balconies each. Calligraphy inside the mosque is the work of Hezarfen Mehmet Efendi.

The mosque has an octagonal base with a central dome. Its plan is a variant of that of the Rüstem Pasha Mosque, but variations such as its corner domes give it a more classical character than the Rüstem Pasha Mosque. It is also one of the earliest examples of the 18th century trend towards domes that were proportionally higher and narrower. The cross vault over the central opening is an innovation first seen in this mosque. Rather than the five domes over the entrance portico – typical for Ottoman mosques – the Yeni Valide employs a cross vault over a central bay and cloister vaults over side bays. The interior decoration consists of stone carvings including muqarnas – intricate stone carvings with floral motifs – and tiles with repetitive floral patterns.

The windows of the mosque make use of both pointed and curved arches. Those below the domes are pointed, creating the visual effect of pushing the domes upwards. The windows in the domes have rounded arches, which creates the visual effect of the dome pushing downwards on the structure beneath. Both the entryway and the octagonal fountain (shadirvan) in the courtyard make liberal use of very detailed stone carvings and the tomb of Gülnûş features an open top and intricate metal latticework. The primary school is located above the north gate to the mosque complex. 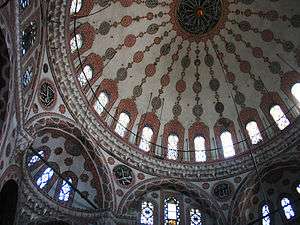 Interior of the dome of the Yeni Valide Mosque in Üsküdar, Istanbul.