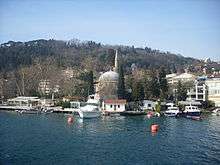 Bebek Mosque as seen from Bosphorus.

Bebek Mosque was designed by Mimar Kemaleddin (1870–1927) in the architectural style of First national architectural movement, and built in Bebek on the place of a mosque, which was commissioned by Grand Vizier Nevşehirli Damat Ibrahim Pasha (1666–1730).[1]

It is situated inside a courtyard surrounded by low concrete walls on Cevdet Paşa Cad. behind the Bebek Pier in Bebek Bay on Bosphorus. The mosque has a square plan, and is built in limestone ashlar. The main dome is supported by four half domes sitting on eight frames. It has six arched windows, two each in the front and back, and one each at sides, and 28 small arched windows in total above them. The mosque has a polygonal minaret on a high base adjecent to the western wall. The underside of the minaret balcony is decorated with three lines of muqarnas. Minaret's entrance is next to the narthex outside the mosque.[1]