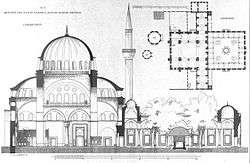 The Bayezid II Mosque (Turkish: Beyazıt Camii, Bayezid Camii) is an Ottoman imperial mosque located in the Beyazıt Square area of Istanbul, Turkey, near the ruins of the Forum of Theodosius of ancient Constantinople.

The Beyazidiye Camii was commissioned by Ottoman Sultan Bayezid II, and was the second large imperial mosque complex to be erected in Istanbul after the conquest. As the earliest complex, the Fatih Mosque was subsequently destroyed by earthquakes and completely rebuilt in a different style, the Beyazidiye complex is of considerable historical and architectural significance.[1] That the architect was a nephew of the Greek architect of the Fatih Mosque (Atik Sinan or Christodoulos), is known from a grant of Bayazid II.[2] This grant confirms the endowment by Mehmed II of the Greek orthodox Church of St. Mary of the Mongols, the only church in Istanbul never converted into a mosque, to the mother of Christodoulos (the Bayezid II Mosque's architect's grandmother) in acknowledgment of the two architects' work.[2] Little else is known about the architect other than that he also built a caravansary in Bursa; however, the polished style of the mosque itself indicates experience with earlier Ottoman and western architectural techniques.[3] The surrounding külliye complex (madrasah, primary school, imaret (public kitchen) and hammam), date from 1501 to 1506.

The dome was partially rebuilt after an earthquake in 1509, and Mimar Sinan conducted further repairs in 1573–74. The minarets burned separately in 1683 and 1764. An inscription above the courtyard entrance suggests that repairs were also conducted in 1767.

The mosque is oriented along the northwest-southeast axis with a courtyard to the northwest with an area almost equal to that of the mosque itself. the courtyard has monumental entrance portals on each side. The courtyard is a colonnaded peristyle, with twenty ancient columns of porphyry, verd antique and granite salvaged from churches and ancient ruins, roofed with 24 small domes, and with a pavement in polychrome marble.

The mosque itself is approximately 40 metres (130 feet) square, with a 17-metre (56-foot) diameter dome. The design is that of a central dome held by semi-domes on all four sides. The mosque is constructed entirely of cut stone appropriating colored stones and marbles appropriated from nearby Byzantine ruins. 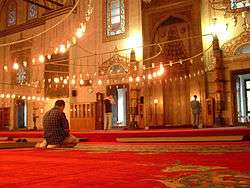 The interior of the mosque is patterned after the Hagia Sophia on a smaller scale.[1] In addition to the huge central dome, semidomes to the east and west form a nave, whereas to the north and south extend side aisles, each with four small domes which extend the length of the mosque, but which are not divided into galleries. The dome is supported by huge rectangular piers, with smooth pendentives and stalactite decorations. The space is lit with twenty windows at the base of the dome and seven windows on each semi-dome, in addition to two tiers of windows on the walls.

On the west side, a broad extended corridor extends considerable beyond the main structure of the building. Originally designed as four domed rooms to serve as a hospice for wandering dervishes, the wings were integrated into the prayer hall in the sixteenth century and now consist of three consecutive rooms separated by archways.[4] At the ends of these wings are the two minarets.

Behind the mosque is a small garden, containing the türbe (tombs) of Sultan Bayezid II, his daughter Selçuk Hatun, and Grand Vizier Koca Mustafa Reşid Pasha.[1] Below the garden is an arcade of shops whose rents were originally intended to support the mosque. This arcade was designed by Mimar Sinan in 1580 and extensively restored in the 1960s. The former public kitchens of the mosque was converted into the State Library of Istanbul by Sultan Abdulhamid II in 1882 and houses over 120,000 books and 7000 manuscripts. Likewise, the former madrasah now houses the Istanbul Municipal Library.