One of the earliest examples of Ottoman architecture, the Yeşil Mosque was constructed by order of the Grand Vizier Çandarlı Kara Halil Hayreddin Pasha of Sultan Murad I in Iznik. It was later completed by his son Ali Pasha. The inscription on the mosque gives the date of construction as AH 780-794 (1378-1391), and the name of the architect as Haci bin Musa. 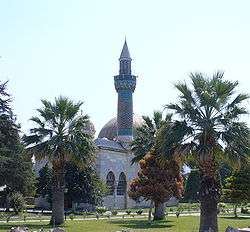 The Yeşil Mosque is located near the Lefke Gate on the eastern edge of the city. It is composed of a three-bay portico and a single prayer hall covered with a single dome measuring 10.5 m (34 ft) in diameter. The height of the dome is 17.5 m (57 ft) above the floor, it has four windows and the lower portion of the interior walls are coated with gray marble panels. The mosque has a single minaret in the northwestern corner of the building which is decorated with composed glazed terra-cotta green, yellow, turqouise and dark purple coloured tiles. The colourful tiles minaret gives the mosque its name: Yeşil (green in Turkish).

The mosque was damaged in 1922 by the Greek army during the Turkish War of Independence. The mosque was restored between 1956 and 1969.