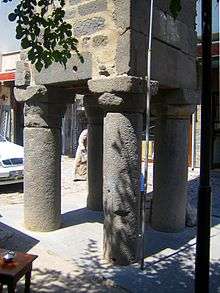 Base of the Four-legged Minaret next to Sheikh Matar Mosque.

The mosque is situated in the Yenikapı Street of Savaş neighborhood at Diyarbakır's walled historical district of Sur. The mosque is named after Sheikh Matar (Mutahhar) as it is believed that the mosque's estate covering 600 m2 (6,500 sq ft) contains the grave of the sheikh.[1][2]

According to an inscription attached at the minaret, the mosque was built by Hajji Hüseyin, son of Hajji Ömer during the reign of Ag Qoyunlu Sultan Kasım Han in 1500. Locally, it is also known as the "Kasım Padishah Mosque".[1][3] It is owned by the General Directorate of Foundations.[2]

The mosque is a single-dome, quadratic-plan building having stone masonry walls alternating with brick. There are three windows at each side, and two in the front and backside each, all arched. The two windows on the qibla wall are closed with masonry.[3] It has a covered area of 221 m2 (2,380 sq ft), and can hold up to 500 worshipers.[1][2]

The stand-alone minaret in the form of a quadratic prism is ereceted on four massive stone columns. In the "Diyarbakır Salnâmeleri" (Yearbooks of Diyarbakır), it is recorded that the tower was built in 906 as a stable and high structure, and was converted into a minaret with the construction of the mosque next to it after the conquest of the region by Islamic people.[1][3] Today, local people construe that the four columns at the minaret's base symbolize the four main denominations of Sunni Islam , namely Hanafi, Hanbali, Maliki and Shafi'i.[2][4]

The mosque underwent a restoration in 1960 through the General Directorate of Foundations.[1][2]

During a shootout between the members of the Kurdish militant group Patriotic Revolutionary Youth Movement (YDG-H) and the police, two columns of the minaret suffered damage by automatic weapon fire in the night of November 25, 2015.[4] Tahir Elçi, the chairman of Diyarbakır Bar Association, reacted to the incident with a tweet naming it a "complot".[1]

On November 28, 2015, Tahir Elçi gave a press statement at the Four-legged Minaret calling for an end to violence. He said that "armed conflicts with heavy weapons within living areas of civilians like the walled district of Sur in Diyarbakır are not only against the Geneva Conventions, they also damage many historical buildings and mosques. The damage seen on the Four-legged Minaret shows how important our demand is to end armed conflicts and -police- operations within living areas."[1]

Shortly after his speech, a shootout erupted between the attacking militants and the police when police stopped a taxi not far from the minaret. Tahir Elçi was hit by a single bullet to his head and died at the spot. Two undercover police officers, including the personal guard of Elçi, were also killed during the shootout.[1]