Elevation and plan published by Cornelius Gurlitt in 1912 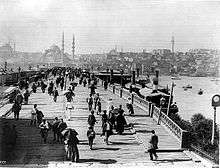 A late 19th century photo of the Galata Bridge in Istanbul, with the Yeni Cami (New Mosque) seen in the background.

The construction of the mosque began in 1597. It was ordered by Sultana Safiye, who was the wife of Sultan Murad III and later Valide Sultan (Queen Mother) of Sultan Mehmed III. She ordered the mosque in her capacity as Valide Sultan, two years after Mehmed III's ascension to the Ottoman throne in 1595, hence the original formal name "Valide Sultan Mosque".

The original architect was Davut Ağa, an apprentice to the great Mimar Sinan. However, Davut Ağa died in 1599 and was replaced by Dalgıç Ahmed Çavuş. The construction took more than half a century and was completed by another Valide Sultan, Sultana Turhan Hatice, mother of Sultan Mehmed IV.

The project was hampered by political disconnect, and its location and monetary implications created dissent in the court. The Eminönü neighborhood was the city's foremost commercial center, and home to a predominantly Jewish population. In situating the mosque there, Sultana Safiye hoped to extend the sphere of Islamic influence within the city, capitalizing on the growing discontent of local and foreign merchants caused by the growing power and influence of their Jewish counterparts, which gave the Sultan an easy justification for confiscating their property. However, the vast monetary outlay drew sharp criticism. In particular, the Janissaries resented the growing political power of the Valide Sultan, and believed the mosque to be an unnecessary expenditure. Sultana Safiye was forced to abandon the project upon Mehmed III's death in 1603. The new Sultan, Ahmed I, had no interest in pursuing the project after Sultana Safiye was relegated to the harem and the construction was abandoned.

After 1603, the partially constructed structure gradually fell into ruins; and was severely damaged during the Great Fire of Istanbul (1660) which started on 24 July 1660 and, lasting for slightly more than two days (circa 49 hours, according to the chronicles of Abdi Pasha),[1] destroyed many neighbourhoods in the city.[1][2] Later that year, the imperial architect Mustafa Ağa suggested that Sultana Turhan Hatice, mother of Sultan Mehmed IV, should complete the project as a work of piety.[3] Sultana Turhan Hatice also ordered the construction of the nearby Spice Bazaar, which forms a part of the külliye of the New Mosque.[3] Thus, in the last months of 1660, the construction of the mosque was resumed, while the construction of the adjacent bazaar began.[3]

A busy market in the courtyard of the New Mosque, Istanbul by Themistocles von Eckenbrecher, 1873.

The exterior of the mosque itself boasts 66 domes and semi domes in a pyramidal arrangement, as well as two minarets. The main dome measures 36 metres (118 feet) in height, and is supported by four flanking semi-domes. The dome plan of the New Mosque is based on the earlier Şehzade Mosque designed by Mimar Sinan, and on Sedefkar Mehmed Agha's Sultan Ahmed Mosque.

As with other imperial mosques in Istanbul, the mosque itself is preceded by a monumental courtyard (avlu) on its west side. The courtyard of the New Mosque is 39 metres (128 feet) on a side, bordered on its inner side by a colonnaded peristyle covered by 24 small domes. An elegant şadırvan (ablution fountain) stands in the center, but is only ornamental. The actual ritual purifications are performed with water taps on the south wall of the mosque. The façade of the mosque under the porch is decorated with İznik tiles. Stone blocks supplied from the island of Rhodes were used in the construction of the mosque. 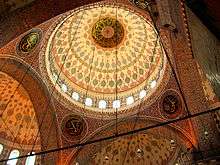 The interior of the mosque is square shaped and measures 41 metres (135 feet) on each side. The central area is defined by four large piers which are the main support for the dome. On the sides and rear of the central area are colonnades of slender marble columns connected by arches in a variety of styles. The dome is 17.5 metres (57 feet) in diameter and has a height of 36 metres (118 feet). Like many other Ottoman imperial mosques, on the 4 corners where the dome meets the pillars holding it up, are calligraphic plates with the names of the first four khalifahs, Abu Bakr, Umar, Uthman, and Ali. The interior space is extended with semi-domes along the east-west axis of the building, with smaller domes above each corner of the nave and even smaller domes above the corners of the galleries.

The interior of the mosque is decorated with blue, green and white İznik tiles, which are considered somewhat inferior in quality to tiles in earlier imperial mosques. The mihrab is decorated with gilded stalactites and the minbar had a conical canopy with slender marble columns.

As with other imperial mosques in Istanbul, the New Mosque was designed as a külliye, or complex with adjacent structures to service both religious and cultural needs. The original complex consisted of the mosque itself, a hospital, primary school, public baths, a türbe, two public fountains and a market. To this complex was added a library during the reign of Sultan Ahmed III.

The mausoleum (türbe) holds the graves of the Valide Sultan Turhan Hatice, her son Mehmed IV as well as five later sultans (Mustafa II, Ahmed II, Mahmud I, Osman III and Murad V) and various members of the court.

Ongoing restoration and maintenance works are implemented by the Turkish General Directorate of Foundations.