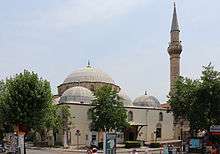 Interior of the Mosque

Built in the 18th century in the Kalekapisi district, the mosque is one of the most important Ottoman mosques in the city. The main dome, which rises on a high rim, is supported by three semi domes, one each in the east, west, and south directions, as well as three domes on the northern side. There are tiled panels decorated with Koranic verses in taliq script on the pointed arch-formed lunettes of the windows on the northern façade of the mosque and inside it.

This article is issued from Wikipedia - version of the 11/14/2015. The text is available under the Creative Commons Attribution/Share Alike but additional terms may apply for the media files.