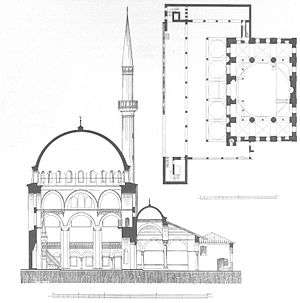 The Rüstem Pasha Mosque was designed by Ottoman imperial architect Mimar Sinan for the grand vizier Rüstem Pasha (the husband of one of the daughters of Suleiman the Magnificent by Hürrem Sultan (Roxelana), Mihrimah Sultan). Rüstem Pasha died at age 61 in July 1561 and the mosque was built after his death from around 1561 until 1563.[1] The mosque complex hosts now a religious school.[2]

The mosque was built on a high terrace over a complex of vaulted shops, whose rents were intended to financially support the mosque complex. Narrow, twisting interior flights of steps in the corners give access to a spacious courtyard. The mosque has a double porch with five domed bays, from which projects a deep and low roof supported by a row of columns.[3]

The Rüstem Pasha Mosque is famous for its large quantities of İznik tiles, set in a very wide variety of floral and geometric designs, which cover not only the façade of the porch but also the mihrab, minbar and walls. There are around 80 different patterns.[4] These tiles exhibit the early use of Armenian bole, a tomato-red pigment that would become characteristic of İznik pottery. Some of the tiles, particularly those in a large panel under the portico to the left main entrance, are decorated with sage green and dark manganese purple that are characteristic of the earlier 'Damascus ware' coloring scheme.[5] No other mosque in Istanbul makes such a lavish use of these tiles.[6]

The plan of the building is basically that of an octagon inscribed in a rectangle. The main dome rests on four semi-domes; not on the axes but in the diagonals of the building. The arches of the dome spring from four octagonal pillars— two on the north, two on the south— and from piers projecting from the east and west walls. To the north and south are galleries supported by pillars and by small marble columns between them.[3]