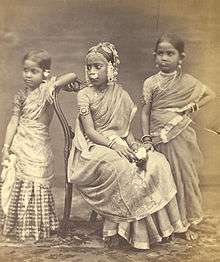 A Tamil Hindu girl (center) in 1870 wearing a half-saree, flowers and jewelry from her Ritu Kala Sanskara rite of passage.

In South India, girls who experience their menstrual period for the first time are given presents and celebrations to markoccasion though women who are menstruating are not allowed in the household chores and are aren't supposed to go into Hindu temples during period of 3 nights.

This milestone in a girl's life is observed by her family and friends,with gifts and her wearing a sari for the ritual.The rite of passage is celebrated, in modern times, as a "half-saree party" where the female relatives and friends of the girl gather, and she receives and wears a half-saree and other gifts. Thereafter, at ceremonious events, she wears the half-sarees, until her marriage when she puts on a full

In Shaktism the Earth's menstruation is celebrated during the Ambubachi Mela, an annual fertility festival held in June, in Assam, India.During Ambubachi, the annual menstruation course of the goddess Kamakhya is worshipped in the Kamakhya Temple.