Not to be confused with Purée.

Puri (also spelled poori) is an unleavened deep-fried Indian bread, commonly consumed on the Indian subcontinent. It is eaten for breakfast or as a snack or light meal. It is usually served with a curry or bhaji, as in Puri bhaji.

Puri is most commonly served at breakfast. It is also served at special or ceremonial functions as part of ceremonial rituals along with other vegetarian food offered in prayer as prasadam.

Puri is prepared with wheat flour, either atta (whole wheat flour), maida (refined wheat flour), or sooji (coarse wheat flour). Maida flour is the most common flour used in making Puris. In some recipes, cumin seed are also added to the dough. A dough of flour and salt is either rolled out in a small circle or rolled out and cut out in small circles and deep fried in ghee or vegetable oil. While deep frying, it puffs up like a round ball because moisture in the dough changes into steam which expands in all directions. When it is golden-brown in color, it is removed and may be served hot or saved for later use (as with the snack food pani puri). The rolled puri may be pricked with a fork before deep frying to get a flat puri for chaat like bhel puri. A punctured puri does not puff when cooked because the steam escapes as it cooks. 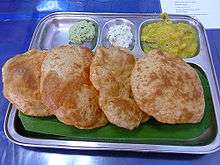 Puri can be served with halwa, korma, chana masala, dal, potato based curries (e.g.: saagu, bhaji, bhujia, Aloo ki tarkari, shaak, sambharo[1]), shrikhand, basundi. In some parts of India, puri is also served with a mixed vegetable dish that is prepared during Puja, and with kheer, a dessert prepared with rice, milk and sugar. Puri is often the bread of choice for festivals and special occasions.

A variant of puri is bhatoora, which is three times the size of a puri and served with chholey (spicy chick peas). It often constitutes a full meal. (See chole bhature). Bhatoora is made of a different flour; puri uses whole-wheat flour while bhatoora uses leavened all-purpose flour (maida). In the Indian state of Odisha a large size puri is made during Bali Yatra which is called thunka puri (Odia: ଠୁଙ୍କା ପୁରି).[2][3][4][5][6]

Another variant, largely popular in the Northern Indian state of Uttar Pradesh is bedvi. It is a saltier and stiffer version of the regular puri, and is often stuffed with lentils.[7]

Another variant of the puri popular in the eastern states of West Bengal and Odisha is the luchi. In Assam, it is pronounced as lusi. Luchis in Bengal are served with typical side dishes like aloor dum (potato preparation),begun bhaja(fried brinjal) and others

The puris used for panipuri are smaller, and are usually made crisper by the addition of rava/sooji (semolina) to the dough.

Sev puri is an Indian snack offered by street vendors who serve chaat.

Street vendors in Mumbai serve bhel in a throw-away folded leaf with a flat puri to scoop it.