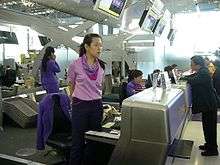 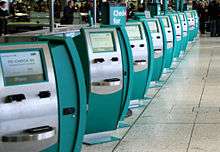 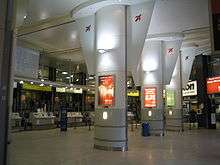 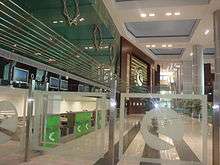 Airport check-in uses service counters found at commercial airports handling commercial air travel. The check-in is normally handled by an airline itself or a handling agent working on behalf of an airline. Passengers usually hand over any baggage that they do not wish or are not allowed to carry on to the aircraft's cabin and receive a boarding pass before they can proceed to board their aircraft.

Check-in is usually the first procedure for a passenger when arriving at an airport, as airline regulations require passengers to check in by certain times prior to the departure of a flight. This duration spans from 15 minutes to 4 hours depending on the destination and airline. During this process, the passenger has the ability to ask for special accommodations such as seating preferences, inquire about flight or destination information, make changes to reservations, accumulate frequent flyer program miles, or pay for upgrades.

The airline check-in's main function, however, is to accept luggage that is to go in the aircraft's cargo hold and issue boarding passes.

Check-in options and procedures vary per airline with some airlines allowing certain restrictions other airlines have in place, and occasionally the same airline at two separate airports may have different check-in procedures. Such differences are usually not noted by the average passenger and occasionally lead to service interruptions when one carrier refuses to abide by the procedure that another carrier normally would be willing to do.

In-town check-in service is a service offered by some cities such as Abu Dhabi, Seoul, Hong Kong, Delhi, Kuala Lumpur–International, Stockholm, Vienna and Taipei, where passengers may check in luggage in designated places within the city but outside the airport. This reduces check-in time and queuing at the airport.

At the time of check-in one of the Agent's primary duties is to check for valid documents. This includes tickets, passports, visas, letters of consent etc. (depending on the type of visit, the arrival and destination of the trip).

Passengers heading for countries like the United States and United Kingdom which have special requirements, have to provide information like their name, address and contact details of places in which they live, and places in which they intend to stay once in the United States and United Kingdom respectively. This information, known as Advance Passenger Information, is now usually collected online with or after the flight booking.

At the time of check-in, the passenger hands over baggage which is checked by the airport security and sealed. Anything that is above the weight limit or which is not allowed to be carried by the passenger themself to the aircraft cabin is usually handed over to the agent at the time of check-in. The baggage allowance, if any, is prescribed by the airline and anything in excess will warrant additional surcharges. These baggage restrictions are based on the class the passenger is traveling. e.g. Economy Class, First Class, Executive Class.

Air New Zealand domestic services introduced a self-check-in process allowing passengers with bags to arrive and check-in at the self-service kiosks with luggage up to 25 min prior to departure time. [1] Passengers then attach the baggage tag and drop the bag themselves at the baggage drop belt. However, passengers without checked luggage can go straight to the lounge (if entitled to lounge access) and check in at the kiosk there using their ePass (a small RFID device only for its premium customers)[2] or proceed straight to the departure gate when boarding using either their ePass or mPass (an application which can be downloaded or installed onto mobile phones to work as an electronic boarding pass).[3]

It is expected that self-service bag drop will be much more common.[7]

Usually at the time of check-in, an option of selecting the seats is offered, unless the seat is already selected. The agent may ask if a window or aisle seat is wanted.

Online check-in is the process in which passengers confirm their presence on a flight via the Internet and typically print their own boarding passes. Depending on the carrier and the specific flight, passengers may also enter details such as meal options and baggage quantities and select their preferred seating.

This service is generally promoted by the airlines to passengers as being easier and faster because it reduces the time a passenger would normally spend at an airport check-in counter. Some airlines, however, would still require passengers to proceed to a check-in counter at the airport, regardless of preferred check-in method, for document verification (e.g., to travel to countries where a visa is required, or to ensure the credit card used to purchase is genuine and/or matches the identity of the person who made the purchase). If passengers need to continue the check-in process at the airport after performing an online check-in, a special lane is typically offered to them to reduce wait times unless all desks are designated as baggage drop-off points. Furthermore, online check-in for a flight is often available earlier than its in-person counterpart.[8] The process then transfers to passengers' control over their check-in. Airlines may use the system because self-service is frequently more efficient to operate, with a greater ability to cope with surges in passenger numbers. It also lessens activity at the airport, saving airlines money and reducing passenger waiting times.

Ryanair charges passengers a fee which can amount to 60 Euros for not using online check-in, except in certain limited circumstances. Furthermore, by the start of 2010, all passengers were required to check in online, therefore abolishing the use of check-in desks.[9] Despite this, passengers are still charged to print their boarding cards out.

Online check-in is increasingly becoming required in other legacy carriers, particularly in Europe as the airport check-in desks are being relegated as baggage drop points only.

Northwest Airlines was the first to offer online check-in. The system was first offered on a limited basis starting in the second quarter of 1999, and was available to the general public on selected flights the following quarter.[10] Since then, a growing number of airlines have introduced the system.

Typically, web-based check-in for airline travel is offered on the airline's website not earlier than 24 hours before a flight's scheduled departure or seven days for Internet Check-In Assistant. However, some airlines allow a longer time, such as Ryanair, which opens online check-in 15 days beforehand, and AirAsia, which opens it 14 days prior to departure and easyJet, which opens as soon as a passenger is ticketed (however for easyJet, passengers are not checked-in automatically after ticketing, the passenger must click the relevant button). Depending on the airline, there can be benefits of better seating or upgrades to first class or business class offered to the first people to check in for a flight. In order to meet this demand, some sites have offered travelers the ability to request an airline check-in prior to the 24-hour window and receive airline boarding passes by email when available from the airline. Some airlines charge for the privilege of early check-in before the 24-hour window opens, thus capitalising on the demand for desirable seats such as those immediately behind a bulkhead or emergency exit row.

In the mid-late 2000s, checking in was made possible using a passenger's mobile phone or PDA. A GPRS or 3G-capable smartphone or an internet-capable PDA is required in most instances (Finnair allows check-in by text message[11]), and the check-in feature may be accessed by keying in a website on the mobile phone's browser or by downloading a dedicated application. The process is then similar to that which one would expect when checking in using a personal computer.

One disadvantage of early checkin is that it put a restriction on a person's agent changing their flight, as the ticket coupon has to be "opened" again prior to any changes being made, and this may take some time to arrange.

In some situations, it may be necessary to change a passenger's travel plans and the check-in counter will handle these concerns. This may involve changing itinerary, upgrading class of travel, changing to an earlier or later flight but such changes are subject to the conditions of the tickets issued. Economy class tickets normally have high fees or the need to buy a new ticket for itinerary changes, since airlines want claim higher fares from business travellers, and demands from business travellers often include flexibility and late booking.

If the passenger carries a first or business class ticket or presents a certain frequent flyer program membership card (usually the higher-level tiers), or any other arrangements with the carrier, access to the premium check-in area and/or the lounge may be offered.

Singapore Airlines also offers this service to First Class and Suites passengers, whose flights depart Singapore Changi Airport's Terminal 3. These passengers have a dedicated curb side entrance and can wait at couches while staff assist them in checking-in. They are then lead to a dedicated passport control counter.

In some cities (including Bangkok, Hong Kong, Kuala Lumpur, New Delhi, Chennai, Seoul, and Taipei), certain airlines provide in-town check-in services, allowing passengers to check their luggage at check-in counters located in railway or subway terminals as much as a day ahead of time.[13] This service allows passengers to take a train to the airport without the burden of carrying their luggage to the airport terminal. In Seoul, for example, Korean Air, Asiana Airlines and Jeju Air offer check-in services at Seoul Station.[14] In Kuala Lumpur, Malaysia Airlines and Cathay Pacific offer in-town check-in at KL Sentral.[15]