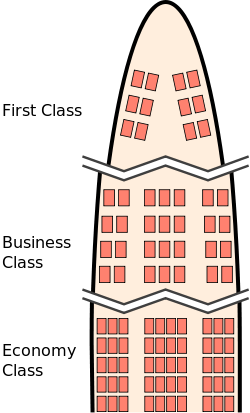 A travel class is a quality of accommodation on public transport. The accommodation could be a seat or a cabin for example. Higher travel classes are designed to be more comfortable and are typically more expensive.

While an airline may only have two or three classes of service, they will use approximately ten to fifteen different booking codes in order to control the amount of each fare level sold. The booking code used by airlines and agents is typically (but not always), the first letter of the fare basis shown on the ticket and in industry fare displays.

Historically, airlines only used a few codes, and these were almost identical across the industry. Typical examples were F or P for First Class, J or C for Business, and Y for economy. With the advent of cheaper fares and more frequent travel, airlines increased the number of available fare types and the number of booking codes required to differentiate among them.

There is now no industry standard with regard to airline booking codes, although the Y code is almost always still used for unrestricted economy travel.

Most low-cost carriers have greatly simplified the fare classes they use to only a few codes, unlike full-service airlines, which use many more.

In Mexico, bus services often have designated levels of service, the top of which is de lujo or clase lujo, followed by plus clase, primera clase, and segunda clase.[1]

Before cruise ships dominated the passenger ship trade, ocean liners had classes of service, often categorized as First Class, Second Class, and Steerage. Companies such as Cunard Line continue this tradition, offering Queen's Grill, Princess Grill and Britannia cabins, each of which have their own allocated lounges and restaurants on board.

Trains often have first class (the higher class) and second class (known as standard class in the UK). For trains with sleeping accommodations, there may be more levels of luxury.

Prior to 1949, most railway bureaus (under the direction of the Transport Ministry) had a three-class structure. As with most contemporary cases, few people could afford first class or even second class, so at times there would be no first class or second class service available in some trains. Some went as far as offering a fourth class "service" with goods wagons.

In 1949, the first "Limited Express with Reserved Seating" (特快對號車) appeared with the Railway Bureau of Taiwan, and it offered a three-class service, inherited locally from Japanese colonial rule. This structure was the norm for all trains, normal or express, until 1953.

In 1953, the "Equality Express" was introduced with second class carriages only. Eventually, all expresses save for the sole Limited Express offered only second class service, and all other, slower trains, offered only third class. This resulted in the quality of service being associated with the speed of the train. The Diesel Limited Express was introduced in 1956 with one class only.

In 1960, with the reforming of Limited Expresses (the Limited Express with Reserved Seating and Diesel Limited Express merged into one fare), all passenger trains officially offered only one class. Therefore, all expresses had only second class carriages and other trains only third class. As time passes, more types of carriages were introduced, but these were thought as types instead of classes.

Travel class illustrations at the beginning of the 20th century. Representations of the station restaurants of the first and second classes (left) and third class (right). Reliefs of the Imperial train station of Metz, France.

There are generally two classes, known as "first class" and "second class", or the equivalent in the local language. The three-tier class structure was abolished on most European railways in the 1950s in favor of a two-tier structure.

Trains in Great Britain provide a two-tier class structure, with the higher tier called "first class". The lower tier was re-branded from "third class" to "second class" by British Rail from 3 June 1956, and then to "standard class" from 11 May 1987.

A convention used by most European railway companies is that the first-class section of a train is marked in yellow, usually with a yellow band above the doors and/or windows. First-class areas may be complete carriages or at one end of a carriage, the other end being second class. Second-class compartments usually have "2+2" seating (2 seats each side of the aisle); first-class compartments are typically "2+1". In Britain and France, some short-distance Suburban trains use "2+3" for the lower class and "2+2" for first class.

Metro, suburban and local trains are sometimes second-class-only. First-class-only trains were common up to the 1980s (see Trans Europe Express) but are now rare. High-speed trains often charge more than slower-speed trains on the same route, but still have first- and second-class seats.

Some trains also have one of these classes:

Indonesian trains, operated by the state-owned PT Kereta Api Indonesia, have three classes for long-distance travel. All types of carriages are seating-only (no sleeper cars).

All classes are non-smoking, air conditioned, and require a seat reservation. All seats can be reserved from 30 – 90 days before travel date until minutes before departure time when seats are still available. Medium-Long distance train have onboard cafeteria, toilets (older carriages have squatting toilet), onboard customer service representative (Train Manager), onboard security, and onboard cleaning services.[2]

Eksekutif trains are the fastest and stop only on a few major stations. However, the eksekutif train may also contain some Bisnis cars, with slightly more expensive tickets than in All-Bisnis trains. Bisnis trains are somewhat slower, but generally do not stop too often as well there may be Ekonomi cars in these trains. Ekonomi trains take significantly more time to reach the destination, as they stop on many smaller stations and have to pass all Eksekutif and Bisnis traffic going in the same direction. Many less important routes lack either Bisnis or Eksekutif service, or both.

For local or commuter trains, single class service is the most common type of service. But in some areas there may be other classes as well which have different seating arrangement and travel time in which the lower classes has more stops than the upper one. For example, Jogjakarta - Solo corridor there are Sriwedari train which is air conditioned and has transverse seating and also Prambanan Ekspress train which is non air conditioned, has longitudinal seating and more stops. Meanwhile, in Jakarta metropolitan area, there's only one class of service available since mid-2013 which is air conditioned and has longitudinal seating.[3] Commuter trains in Jakarta are operated by PT Kereta Api Indonesia subsidiary, PT KAI Commuter Jabodetabek.

From 1872, Japan had a three-class structure for both seating carriages and sleeping carriages. By 1960, as conditions improved on second and third class trains, there were few passengers travelling on first class; therefore, the few remaining first class carriages were rebranded "special" carriages available for hire, and consequently moved Japan's railway system to a two-class system, of which the original second class became the first, and the original third became second.

In 1969, the class structure was abolished altogether. The first class was renamed "Green" carriages and the second "Standard" carriages.

All members of the Japan Railways Group (JR) offer separated classes of travel, with varying levels of availability on any given train.

Most JR Group Green Cars seats have increased width and pitch. In some stations, Green Cars are located nearer to the staircases and escalators leading to/from the train platform. Green Cars also frequently offer slippers and reading materials in Japanese.[5]

Additionally, JR East offers a third category of service, the GranClass, available on its Hayabusa route. Features of GranClass cars include leather seats that recline to a 45 degree angle,[6] raised footrests, adjustable dining tables and cocktail trays, and personal reading lights. Full-service meals, both Japanese and Western, are provided by specialized GranClass attendants, who also serve soft drinks and alcoholic beverages. Because the Hayabusa is a long-distance service to the Tōhoku region, overnight amenities such as slippers, blankets, and eye masks are provided.[7]

During the Victorian era, most trains in the United Kingdom had three classes of accommodation: first class (for upper-class people), second class (for middle-class people), and Third Class (for working-class people). From 1875, when the Midland Railway redesignated its "second class" accommodation as "third class", second class (equivalent to either premium economy or business class) was gradually abolished, while first class and third class were retained. This was because the Railway Regulation Act 1844 required a third-class service to be offered. In addition to this, British third class was initially of a comparable standard to continental European third class and British first class with European first class (the continent having retained three classes). This meant that boat trains in Britain still often operated with three classes of accommodation after the abolition of second class in the rest of the country. From 3 June 1956 British Railways redesignated third class as "second class", finally (as British Rail) renaming it "standard class" from 11 May 1987, in view of the pejorative overtones of "second class".

A coach with accommodation for more than one class is called a "composite coach".

In the United States and Canada, train classes emulate the airlines, although airlines probably took the class levels from trains of the time when they were coming of age (e.g. first, business, coach). Amtrak Acela Express trains have two classes: First Class and Business Class. Amtrak Northeast Regional trains have Business Class and Coach class. Canada's Via Rail has the same classes as Amtrak. Trains with sleeper cars have additional levels. Most commuter trains in USA and Canada generally have a business class and economy class or standard fare. Although business class is offered it typically is just more spacious seats in a more modern sleek cabin. WiFi is available on commuter trains in the southern Ontario corridor, as well as southern Quebec (Via Rail). Full services, such as food and beverage, may not always be a given.