Airport police units are a security police agency assigned to perform law enforcement functions at airports. They provide a wide range of law enforcement duties and responsibilities including patrol, investigation, traffic flow management, and control and response to airport emergencies.[1] Airport police provide enhanced safety to airport employees, and to passengers. Officers can be found at security gates, throughout the terminal area, and around the airport’s perimeter.[2]

In some cases, airport police are branches of larger general purposes agencies. "Airport Safety Officers," are cross-trained in Fire, Emergency Medical Services, law enforcement, and even military units. They support federal security directives and initiatives, airline security programs and passenger screening, enforce airport rules and regulations on the airfield and within secured areas, and assist with traffic and crowd control. Airport police agencies are vital components of the international aviation security system but do not, in themselves, perform all aspects of airport security. 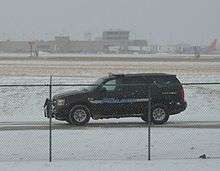 Airport Police Departments are represented in the United States by a membership organization called ALEAN or the Airport Law Enforcement Agencies Network.