The cross-strait charters (simplified Chinese: 两岸包机; traditional Chinese: 兩岸包機; pinyin: liǎng'àn bāojī) are special flights between Taiwan and Mainland China, across the Taiwan Strait. After the Chinese Civil War, no direct flights were allowed between Taiwan and Mainland China due to mistrust and security concerns; this remained the case until 2003. Passengers had to transfer in a third city, such as Hong Kong, to complete their trip.

For the years 2003 and 2005, the scheme was restricted for the Chinese New Year period, so it was then called the Lunar New Year cross-strait charter (simplified Chinese: 两岸春节包机; traditional Chinese: 兩岸春節包機; pinyin: liǎng'àn chūnjié bāojī) in Taiwan, and the charter for Taiwan residents (simplified Chinese: 台湾居民包机; traditional Chinese: 臺灣居民包機; pinyin: táiwān jūmín bāojī) in Mainland China. For these years, the scheme was restricted for Taiwanese businessmen and their family members (excluding students and tourists) who are in Mainland China to travel to and from Taiwan.

In July 2008, charter flights expanded to weekends. Flight restrictions on nationalities were removed and Mainland China residents as well as foreign citizens were able to take the flights.

In November 2008, flights became daily instead only for the weekends. 108 weekly flights were established and the planes no longer had to travel through Hong Kong airspace, cutting travel times by two thirds in some cases such as flying from Taipei to Shanghai.

In April 2009, a new agreement was reached to allow cross-strait flights to become regularly scheduled instead of chartered. The cap on the flights was also raised to 270 flights per week, effective 31 August 2009.[1] On 22 May 2010, another 100 additional weekly flights were permitted to be operated effective 14 June 2010, and Shanghai Hongqiao International Airport and Shijiazhuang Airport were added to the list of allowed destinations.[2][3]

There was no official contact for over 50 years between the governments of Taiwan — where the Kuomintang (KMT) had retreated — and Mainland China since the Communist Party of China established the People's Republic of China in 1949, after the Chinese Civil War. However, when the Chinese Economic Reform began welcoming foreign funds in the 1980s, Mainland China sought greater contact with Taiwan. Chiang Ching-kuo refused, beginning a policy of "Three Noes". The Three Noes policy was abandoned, however, when a Taiwan flight was hijacked and Taiwan was forced to negotiate with Mainland China, beginning a series of negotiations. Merchants started investing in Mainland China and people visited their relatives. Air traffic between Taiwan and Mainland China grew dramatically, but no direct flights were allowed. Passengers traveling to Mainland China had to travel via an intermediate destination such as Hong Kong or Macau, or via South Korea and Japan. The travel time usually took more than a half day, especially during the holidays such as the Spring Festival.

In 2002, Taiwan legislator John Chiang proposed that there should be special charters across the strait, and received support from the public and the aviation industry in Taiwan.

The previous regime of negotiations via the Straits Exchange Foundation and the Association for Relations Across the Taiwan Straits had broken down by the time Chen Shui-bian came to office. A political impasse prevented the resumption of semi-official dialogue, because the People's Republic of China government insisted on the recognition of the one China principle or the more ambiguous 1992 consensus as the basis for the talks. By contrast, the Republic of China government under Chen Shui-bian did not recognise the one China principle and repudiated the 1992 consensus reached under the previous administration. As a result, aviation industry bodies were accredited by the respective governments to negotiate only on the technical and operational aspects of the charter flights.

The governmental bodies politically responsible for the talks were the ROC Affairs Office of the State Council of the People's Republic of China, led by Chen Yunlin.

From 2000 to 2008, progress of talks were often severely affected by the political climate in Taiwan. After the re-election of the Chen Shui-bian government in 2004, the talks for the 2004 Chinese New Year charter flights were aborted when the PRC government was offended by Chen's independence-leaning rhetoric talks.

Aviation companies operated at a huge loss for the 2003 charter flights due to the fact that all passengers could only travel one-way - that is, the flights traveled with no passengers for half the journey. Moreover, due to complicated procedures set out in the talks, the aviation companies could not hold direct-flights and had to travel through Hong Kong or Macau, greatly increasing their cost. Nonetheless, the aviation companies were glad to provide the services, in part due to the historical nature and in part due to the possible promotional benefits from participating in the events, which were widely reported by the media.

Reaction in Taiwan and in Mainland China

The period of 16 charter flights occurred between January 26 and February 9, 2003.

The Taiwanese airlines were the same as in 2003. Most Taiwanese flights departed for Guangzhou (TransAsia Airways), and Kaohsiung was mainly serviced by Uni Air.

As the charter flight was only for Taiwanese merchants returning home for the Chinese New Year, there would not be a demand to travel from Taiwan to Mainland China before the New Year's Day. Neither would there be people needing to travel on the flights from Mainland China to Taiwan that operated on dates after the New Year period.

In order to make sure the original purpose was not violated, in the 2003 case, the ROC government ensured that passengers could only travel one way, that meant no one was allowed to fly from Taiwan to Mainland China before the festival, and no one could travel on the return flight after the festival.

However, since the 2005 charters, the ROC government later approved of passengers traveling the entire round-trip though there were still other limits.

Due to the Sichuan earthquake, many Taiwan travelers were unable to get flights out of the quake region. Both governments reached a deal and chartered four flights to depart from Chengdu and Chongqing to Taiwan on May 16, 2008. 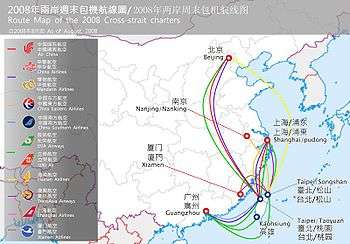 Route Map of the weekend Cross-strait charter, for flights as of August, 2008.

Under the agreement reached on June 13, 2008, charter flights began on weekends starting July 4, 2008.[5] A total of 18 flights per weekend (Friday to Monday) are allowed under this agreement. Unlike previous charters, anyone with legal traveling documents, regardless of nationality, was allowed to travel on these charter flights. Initially, Mainland China permitted flights from Beijing, Shanghai (Pudong Airport), Guangzhou, Xiamen, and Nanjing airports, and the plan was to permit flights from Chengdu, Chongqing, Dalian, Guilin, Shenzhen, Shenyang, Xian and other spots with market demand in the future, while the ROC government permitted flights from Taiwan Taoyuan Airport, Taipei Songshan Airport, Kaohsiung, Taichung, Makung, Hualien, Kinmen, and Taitung.

Started on 15 December 2008, direct flights, direct shippings and direct mail are fully restored between Mainland China and Taiwan per the Three Links agreement. It marks the end of cross-strait charter flights and marks the beginning of regular scheduled flights. Shanghai and Taipei Area Control Center can pass traffic to each other at SULEM in the northern flight path while no direct pass-off for southern flight path.