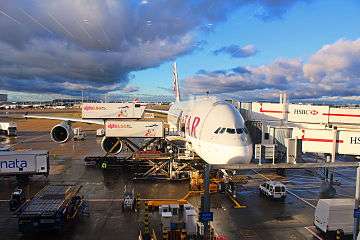 Although the primary function of a BHS is the transportation of bags, a typical BHS will serve other functions involved in making sure that a bag gets to the correct location in the airport. The process of identifying a bag, and the information associated with it, to make a decision on where the bag should be directed within the system is known as sortation.

In addition to sortation, a BHS may also perform the following functions:

There is an entire process that the BHS controls. From the moment the bag is set on the inbound conveyor, to the gathering conveyor, through sorting until it arrives at the designated aircraft and onto the baggage carousel after the flight, the BHS has control over the bag.[1]

Many baggage handling systems offer software to better manage the system. There has also been a breakthrough with "mobile" BHS software where managers of the system can check and correct problems from their mobile phone.

Post September 11, 2001, majority of airports around the world began to implement baggage screening directly into BHS. These systems are referred to as "Checked Baggage Inspection System" by the Transportation Security Administration (TSA) in the USA, where baggage are fed directly into Explosive Detection System (EDS) machines. A CBIS can sort baggage based on each bag's security status assigned by an EDS machine or by a security screening operator. CBIS design standards and guidelines are issued by the TSA once every year since 2008. All CBIS built in the USA must comply with the standard set forth by the TSA. The latest standards can be downloaded from the TSA's website here.