A departure card, also known as an outgoing passenger card or embarkation card, is a legal document used by immigration authorities to provide passenger identification and an effective record of a person’s departure from certain countries.[1] It also serves as a declaration in relation to health and character requirements for non-citizens entering a particular country.[2] The departure card can come attached with its corresponding arrival card with the former being retained in the passport after passport control clearance. The card is then surrendered to passport control upon departure.

Information on the card itself 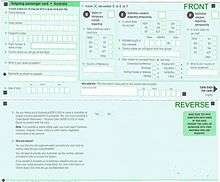 Typically the information on the departure card includes

Travelers are also required to sign, date and declare the information is true, correct and complete.

Passengers on international flights required to fill in departure cards need a valid boarding pass and Passport to proceed through immigration checkpoints.

Depending on the jurisdiction, an immigrant will be issued a card that both has an arrival and departure portion where both share a common serial/control number to facilitate identification. The traveller is usually required to retain the latter in his passport and use that same card to exit the country. Some jurisdictions that have this system are Hong Kong, Macau, Malaysia, Singapore, Indonesia, USA, Brazil and Thailand. Hong Kong and Macau have the departure portion as a carbon copy of the landing card but the flight number, next destination and signature are left blank while the latter six have a shorter portion for departure cards which require less information, but they are joined together as with other to enable immigration officers to tear off one portion as with most ASEAN nations.

For a short time between 2009 and 2010, the Philippines also had a card with portions pertaining to arrival and departure. All passengers, regardless of nationality, are required to fill out the arrival portion and immigrants were required to retain the departure portion. Filipino citizens on the other hand would fill out a separate departure card on their next flight leaving the Philippines. Later in 2011, the Bureau of Immigration reverted to the older cards.

In the United States, the most common example of this is the Form I-94 where the immigrant, once admitted in the US must retain the departure portion of I-94 card at all times during their stay (passport control officers usually staple this portion to the passport). For air travels, the US is one of the few countries that doesn't have a formal passport control for departing passengers. Hence, once a person leaves the US for good, they return the card through the staff at his departing carrier's check-in counter at the airport (if leaving by air) or to border officers (if leaving by land).

As of March 2015 Brisbane Airport offers its passengers to use an app to print departure cards at Departure Card Kiosks within its international terminal.[3]