An airline meal, airline food, plane food or in-flight meal is a meal served to passengers on board a commercial airliner. These meals are prepared by specialist airline catering services.

These meals vary widely in quality and quantity across different airline companies and classes of travel. They range from a simple snack or beverage in short-haul economy class to a seven-course gourmet meal in a first class long-haul flight. When ticket prices were regulated in the American domestic market, food was the primary means airlines differentiated themselves.[1]

The first airline meals were served by Handley Page Transport, an airline company founded in 1919, to serve the London–Paris route in October of that year.[2] Passengers could choose from a selection of sandwiches and fruit.[3] 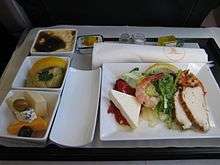 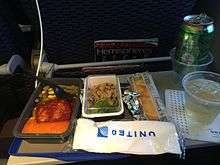 The type of food varies depending upon the airline company and class of travel. Meals may be served on one tray or in multiple courses with no tray and with a tablecloth, metal cutlery, and glassware (generally in first and business classes). Often the food is reflective of the culture of the country the airline is based in.

The airline dinner typically includes meat (most commonly chicken or beef) or fish, a salad or vegetable, a small bread roll, and a dessert.

Caterers usually produce alternative meals for passengers with restrictive diets. These must usually be ordered in advance, sometimes when buying the ticket. Some of the more common examples include:

For several Islamic airlines (e.g. EgyptAir, Emirates, Etihad Airways, Garuda Indonesia, Gulf Air, Iran Air, Mahan Air, Iran Aseman Airlines, Qatar Airways, Saudia, Biman Bangladesh Airlines, Malaysia Airlines, Royal Brunei Airlines and Turkish Airlines), in accordance with Islamic customs, all classes and dishes on the plane are served a Muslim meal with Halal certification – without pork and alcohol. While Emirates, Etihad, and Qatar are still providing bottles of wine to non-Muslim passengers, the cabin crew does not deliver alcoholic beverages lest to violate Islamic customs, unless those non-Muslim passengers request it. Because Iran and Saudi Arabia apply strict Sharia regulations, those countries' airlines do not deliver pork or alcoholic beverages, and all airlines flying to or from Iran or Saudi Arabia are prohibited from serving either. However, Garuda Indonesia still serving alcoholic beverages (whiskey, beer, champagne and wine) to non-Muslim passengers.

In the case the Israeli airlines El Al, Arkia and Israir, all meals served are kosher-certified by Rabbis. Even destinations outside Israel, sky chefs must be supervised by rabbis to make kosher meals and load their planes.

Before the September 11 attacks in 2001, first class passengers were often provided with full sets of metal cutlery. Afterward, common household items were evaluated more closely for their potential use as weapons on aircraft, and both first class and coach class passengers were restricted to plastic utensils. Some airlines switched from metal to all-plastic or plastic-handled cutlery during the SARS outbreak in 2003, since the SARS virus transfers from person to person easily, and plastic cutlery can be thrown away after use. Many airlines later switched back to metal cutlery.

In May 2010, concerns were raised in Australia and New Zealand over their respective flag carriers, Qantas and Air New Zealand, reusing their plastic cutlery for international flights between 10 and 30 times before replacement. Both airlines cited cost saving, international quarantine, and environmental as the reasons for the choice. Both have also said that the plastic cutlery is commercially washed and sterilized before reuse.[4][5][6] Reusing plastic tablewares though is a regular practice among many airliners and food caterers.

Condiments (typically salt, pepper, and sugar) are supplied in small sachets. For cleanliness most meals come with a napkin and a moist towelette. First and business class passengers are often provided with hot towels and actual salt and pepper shakers. 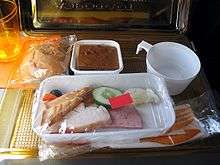 During morning flights a cooked breakfast or smaller continental-style may be served. On long haul flights (and short/medium haul flights within Asia) breakfast normally includes an entrée of pancakes or eggs, traditional fried breakfast foods such as sausages and grilled tomatoes, and often muffins or pastries, fruits and breakfast cereal on the side. On shorter flights a continental-style breakfast, generally including a miniature box of breakfast cereal, fruits and either a muffin, pastry, or bagel. Coffee and tea are offered as well, and sometimes hot chocolate.

Food on board a flight is usually free on full-service Asian airlines and on almost all long-distance flights, while they might cost extra on low-cost airlines or European full-service airline flights. Quality may also fluctuate due to shifts in the economics of the airline industry.

On long-haul international flights in first class and business class, most Asian and European airlines serve gourmet meals, while legacy carriers based in the US tend to serve multicourse meals including a cocktail snack, appetizer, soup, salad, entrée (chicken, beef, fish, or pasta), cheeses with fruit, and ice cream. Some long-haul flights in first and business class offer such delicacies as caviar, champagne, and sorbet (intermezzo).

The cost and availability of meals on US airlines has changed considerably in recent years, as financial pressures have forced some airlines to either begin charging for meals, or abandon them altogether in favor of small snacks, as in the case of Southwest Airlines. Eliminating free pretzels saved Northwest $2 million annually. Nowadays, the main US legacy carriers (American, Delta and United) have discontinued full meal service in economy class on short-haul US domestic and North American flights, while retaining it on most intercontinental routes;[7][8][9] and at least one European carrier, Icelandair, follows this policy on intercontinental runs as well.[10]

Hawaiian Airlines is the only remaining major US airline that offers complimentary in–flight meals on its domestic flights.

Air China has reported that each domestic flight's meal requires RMB50 (US$7.30) while international flights require RMB70 (US$10).[15] However, this figure varies from airline to airline, as some have reported costs to be as low as US$3.50.[16] Air China is also minimizing costs by loading only 95% of all meals to reduce leftovers and storing non-perishable foods for emergencies.

In 1958 Pan Am and several European airlines entered into a legal dispute over whether certain airline food sandwiches counted as a "meal".[17] 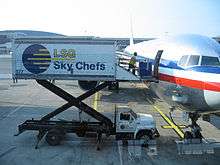 Food being delivered to a Boeing 767

Meals must generally be prepared on the ground before takeoff. Guillaume de Syon, a history professor at Albright College who wrote about the history of airline meals,[18] said that the higher altitudes alter the taste of the food and the function of the taste buds; according to de Syon the food may taste "dry and flavorless" as a result of the pressurization and passengers, feeling thirsty due to pressurization, many drink alcohol when they ought to drink water.[19] Tests have shown that the perception of saltiness and sweetness drops 30% at high altitudes. The low humidity in airline cabins also dries out the nose which decreases olfactory sensors which are essential for tasting flavor in dishes.[20]

Food safety is paramount in the airline catering industry. A case of mass food poisoning amongst the passengers on an airliner could have disastrous consequences. For example, on February 20, 1992, shrimp tainted with cholera was served on Aerolíneas Argentinas Flight 386. An elderly passenger died and other passengers fell ill. For this reason catering firms and airlines have worked together to provide a set of industry guidelines specific to the needs of airline catering. The World Food Safety Guidelines for Airline Catering is offered free of charge by the International Flight Service Association.[21]