This article is about the global airline alliance. For the political party in Benin, see Star Alliance (Benin).

Star Alliance is one of the world's largest global airline alliances. Founded on 14 May 1997, its current CEO is Mark Schwab and its headquarters is in Frankfurt am Main, Germany.[2] As of 7 August 2016, Star Alliance is the second largest global alliance by passenger count with 641.1 million, after SkyTeam (665.4 million) and ahead of Oneworld (557.4 million). Its slogan is "The Way The Earth Connects".

Star Alliance's 27 member airlines operate a fleet of approximately 4,657 aircraft, serve more than 1,330 airports in 192 countries and carry 641.1 million passengers per year on more than 18,500 daily departures. The alliance has a two-tier rewards program, Silver and Gold, with incentives including priority boarding and upgrades. Like other airline alliances, Star Alliance airlines share airport terminals (known as co-location) and many member planes are painted in the alliance's livery.

Lufthansa is one of the alliance's founding members.

On 14 May 1997, an agreement was announced forming Star Alliance from five airlines on three continents: Scandinavian Airlines, Thai Airways International, Air Canada, Lufthansa, and United Airlines.[4][5] The alliance chose Young & Rubicam for advertising, with a budget of $25 million (€18 million).[6] The airlines shared the star logo from the beginning, with its five points representing the founding airlines. The alliance adopted its first slogan, "The Airline Network for Earth",[4] with its goal "an alliance that will take passengers to every major city on earth".[5]

The now defunct Brazilian airline VARIG joined the Star Alliance network[4][7] on 22 October 1997, extending the alliance into South America. Also joining were Ansett Australia and Air New Zealand, expanding Star Alliance to Australia and the Pacific.[8] With the addition of the latter two carriers, the alliance served 720 destinations in 110 countries with a combined fleet of 1,650 aircraft. The next airline to join was All Nippon Airways (ANA), the group's second Asian airline, on 15 October 1999.[9][10]

During the early 2000s, a number of airlines joined Star Alliance; the Austrian Airlines Group (Austrian Airlines, Tyrolean Airways and Lauda Air) joined on 26 March 2000[11][12] and Singapore Airlines on 1 April.[13] BMI (British Midland) and Mexicana Airlines joined on 1 July, bringing the alliance's membership to 13.[14] The addition of BMI made London Heathrow the only European hub with two alliances. During the year, Emirates considered joining Star Alliance, but decided against it.[15] That year the now-defunct BWIA West Indies Airways, which had entered an alliance with United Airlines, considered becoming a member but did not.[16] In 2000, the alliance also opened its first three business centers (in Los Angeles, Frankfurt, and Bangkok) and announced the formation of an Alliance Management Team (AMT), the partnership's executive body.[17] In September 2001, Ansett Australia (the alliance's only Australian member) left Star Alliance due to bankruptcy, giving most of the Australian market to Qantas (a Oneworld member). That year, Star Alliance announced the appointment of a new CEO, Jaan Albrecht.[17]

By May 2007, Star Alliance's 10th anniversary, its members had a combined 16,000 daily departures to 855 destinations in 155 countries and served 406 million passengers annually. The alliance introduced Biosphere Connections, a partnership with UNESCO, the International Union for Conservation of Nature (IUCN), and the Ramsar Convention On Wetlands to promote environmental sustainability.[26][27]

Today, nearly 30% of global air travellers use the services of our member carriers or, looking at it from an overall industry perspective, two thirds of worldwide air travellers use one of the three airline alliances.
— Jaan Albrecht, former Star Alliance CEO[28]

VARIG left the alliance on 31 January 2007,[29] and the two Chinese airlines Air China and Shanghai Airlines joined on 12 December.[30]

On 27 October 2009, Continental Airlines became the 25th member of Star Alliance after leaving SkyTeam three days earlier. According to alliance CEO Jaan Albrecht, "Bringing Continental Airlines into Star Alliance has been a truly unique experience. This is the first time an airline has moved directly from one alliance to another and I would like to thank all those involved in ensuring a smooth switch". At the time, it was rumored that the switch was Continental's first move in a planned United Airlines-Continental merge.[33] Two months later, Brussels Airlines joined the alliance.[34]

Shanghai Airlines left the alliance on 31 October 2010 when it merged with China Eastern Airlines, a SkyTeam member.[38] On 29 September, the chief executive board approved Ethiopian Airlines as Star Alliance's 30th member.[39] In 2010 the alliance flew to 1,172 airports in 181 countries, with about 21,200 daily departures.[39]

Since 2011, more airlines have joined, and others have left due to their collapse or restructuring. In August 2011, after several delays, Air India was rejected for membership when it did not meet alliance requirements.[40][41] On 13 December 2011, Ethiopian Airlines joined, adding five countries and 24 destinations to the alliance's map.[42]

Star Alliance had a tumultuous 2012, with Spanair leaving early in the year when the carrier ceased operations.[43] In early March, Continental merged with United Airlines, ending its membership in the alliance.[44] BMI left on 20 April after its acquisition by International Airlines Group (IAG), the parent company of Oneworld members Iberia and British Airways.[45] On 21 June, Avianca, TACA Airlines and Copa Airlines joined the alliance, increasing its Latin American presence.[46] In November, Blue1 left the alliance, becoming an affiliate of parent Scandinavian Airlines.[47] Shenzhen Airlines joined on 29 November, augmenting Air China's Chinese network.[48]

On 8 March 2013, TAM Airlines announced its departure due to its merger with LAN Airlines to become LATAM Airlines Group.[49] With the addition of EVA Air on 18 June and TACA's integration into Avianca, the alliance now had 28 members and was the largest of the three major airline alliances.[50][51] On 13 December, Air India was again invited to begin an integration process with Star Alliance.[52] On 31 March 2014, TAM Airlines moved to Oneworld, and US Airways and an American Airlines affiliate also left the alliance.[53] That day, Avianca Brazil announced that it would join Star Alliance in 2014 as an affiliate of Avianca.[54] After TAM Airlines and US Airways left, the alliance had 26 members. On 24 June, Air India was approved, joining the alliance on 11 July.[55][56][57][58] Avianca Brazil then joined the alliance on 22 July 2015.[59] Future Connecting Partners member Mango, South African Airways' low-cost subsidiary, will be joining in 3Q 2016.[60] Other Connecting Partners candidates include Air India Express and Alliance Air (both subsidiaries of Air India) as well as Juneyao Airlines (which codeshares with Shenzhen Airlines).[61] On 10 October 2016, Juneyao Airlines confirmed their joining into Star Alliance as Connecting Partners in 2Q 2017.[62] 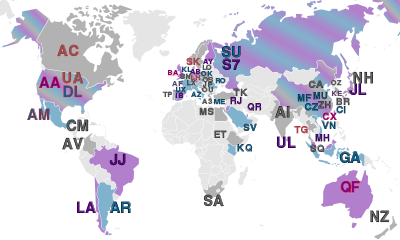 World map showing home countries of the airlines in the three largest airline alliances: Star Alliance (grey), SkyTeam (blue) and Oneworld (purple) with IATA codes of founding members outlined in red. (In the SVG file, hover over a code to highlight its alliance; click to load its article.)

No airline has confirmed to join Star Alliance yet.

Codeshare flights of Star Alliance airlines are consistent. This cooperation led to suspicions of anti-competitive behavior; the alliance was suspected by the European Union of being a virtual merger of its members, and speculation existed that if government regulations were relaxed the members would merge into one corporation.[88]

In 2007, alliance members flew 18,521 daily flights to 1,321 airports in 193 countries with a fleet of 4,025 aircraft. Its members carried a total of 627.52 million passengers, with revenue of US$156.8 billion (€145 billion). It had 28 percent of the global market based on revenue passenger kilometers (RPK), greater than the combined market share of all airlines not in one of the three major alliances. All alliance carriers combined employed over 405,000 pilots, flight attendants, and other staff. Star Alliance was voted best airline alliance in the Skytrax 2007 World Airline Awards.[90]

Co-location at airports (under one roof) 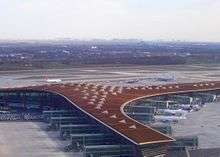 Star Alliance has two premium levels (Silver and Gold), based on a customer's status in a member's frequent-flyer program. Member and regional airlines recognize Star Silver and Gold status, with a few exceptions mostly pertaining to airport lounge access. Membership is based on the frequent-flyer programs of the individual airlines. Many members have a premium status beyond Gold, which is not recognized across the alliance.

Star Alliance Gold status is given to customers who have reached a higher level of a member airline's frequent-flyer program. Benefits are priority reservations wait-listing, airport stand-by and check-in and baggage handling; an additional checked luggage allowance of 20 kg (or one extra piece, where the piece rule applies), and access to designated Star Alliance Gold lounges the day and place of departure with the presentation of a Star Alliance boarding pass. Some airlines also offer preferred seating (an exit seat or a special section of the plane); guaranteed seating on fully booked flights, subject to the booking class code and notice period, and free upgrades in the form of a voucher, certificate or automatic upgrade at check-in. United restricts US lounge access for their Gold Members to long-haul international passengers; Gold members from other carriers are welcome in US lounges run by United on all itineraries.