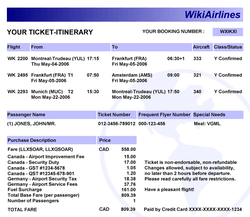 A sample itinerary for an open jaw electronic ticket from Montreal to Amsterdam, and returning from Munich

An open-jaw ticket is an airline return ticket where the destination and/or the origin are not the same in both directions.

There are three types:

Using different airports in the same city is not considered an open-jaw, so a passenger on a London to JFK trip who returned from Newark would still be a return trip as both airports are considered to be in New York.

The open gaps between the cities show on the itinerary as ARNK, the same code that shows on an airline or agency's Global Distribution System. The term (pronounced arunk) means "arrival unknown".

The reason for this is that airline reservation systems (and major GDSs) require the segments following on sequentially, so arriving at one city, and then departing from another, will cause the system to return an error message. The ARNK field tells the system that this is intentional, and also allows for the ticketing system to blank the unused coupons of a ticket.

A typical destination open-jaw would look like this on an itinerary, with the ARNK on the second segment to show that it is not being flown on that ticket.

In some cases, this type of arrangement is needed for boat cruises that do not return to the departure city. In other cases, the traveler wishes to explore between two points and not have to worry about using time to return to the arrival city. For example, a traveller might fly from London to Bangkok, travel around Thailand by public transport and fly back home to London from Phuket. Another example would be a traveler flying from New York City to San Francisco but then returning to Washington, D.C. Open-jaw tickets are a flexible and relatively inexpensive way of flying, as such tickets are almost always less expensive than purchasing two one-way flights between the destinations visited.

Another market commonly traveled under an open-jaw itinerary is the one of local one-way tours. Take, for example, a tour of Florida, where a traveler flying into Jacksonville, Orlando, or Miami rents a car or joins a bus tour at their arrival airport, and returns the car or ends the tour in the town from which they will be flying home.