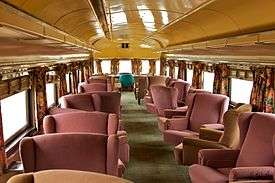 First class is the most luxurious travel class of seats and service on a train, passenger ship, airplane, bus, or other system of transport.[1] It is usually much more expensive than business class and economy class, and offers the best service and luxurious accommodation. 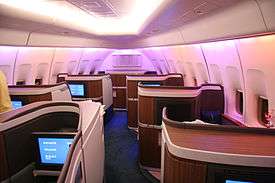 The first-class section of a fixed-wing jet airliner is typically toward the front of the aircraft. Many airlines have removed first class altogether from their international flights, offering business class as their highest level of international service. First class passengers are usually allowed into lounges at airports while they wait for their flights.

Australia has internal rail operations in each of its states, excluding Tasmania, normally run by the State Government but in some cases is run by private operators. In each state, first class travel differs.

First-class travel on TrainLink comes in two forms. On Xplorer and XPT trains, first-class seating is offered which include an increased legroom and seating recline over economy-class seating. On some XPT trains, first-class sleeping compartments can also be found. On day services these accommodate three people per compartment, and by night they carry two people with bunk-style accommodation.

First-class accommodation on V/Line is a 2x2 seating arrangement, with extra legroom and recline, only available on certain locomotive-hauled services.[2]

This railway privately operates the tourist-oriented The Overland, Indian Pacific, and The Ghan services. The first class travel on these trains are branded as Platinum Service (on the Indian Pacific and The Ghan) with roomette, twinette and deluxe cabins; or Red Premium Service (on The Overland) with 2x1 seating, extra legroom, and more recline than the Red Service seating.

Via Rail offers various kinds of first class depending on length of travel. Shorter trips have a first class section, called Via 1, with hot meals served at the seat and a full bar service. Economy passengers must purchase food if desired from a rolling cart. Longer trips have various kinds of sleeper compartments including some with showers, washrooms and pull-out beds.

First class car on the Berlin-Warszawa-Express.

The various private and state-owned railways in Germany featured first-class, second-class and third-class amenities from the start. Beginning in Prussia in 1852, extremely austere fourth-class coaches were introduced. After nationalization (1920) and consolidation (Deutsche Reichsbahn-Gesellschaft, 1924), the fourth class was abandoned in 1928 in order to generate more revenue by forcing passengers to pay the higher prices for third-class tickets.

As those of most of the rest of Europe, the railways of East as well as West Germany moved to a two-class system in 1956. To this end, the first class was abandoned and the former second and third classes redesignated as the new first and second classes. Except for some regional and commuter train services (including some, but not all S-Bahn systems), which are second-class only, this distinction exists to this day.

With some, primary local, services operated both by DB and other companies, there is no difference in seating between classes, with exception to the presence of armrests and tables (with ostensibly cleaner interiors in some instances) in first class. The rationale for providing first-class spaces on these services is mainly that due to the higher price, there are usually seats left in first class when all second-class seats are taken. As such, the justification of purchasing First Class on regional services, often for the average traveller, is more so dictated as offering a "better-odds" gamble of finding vacant seating availability on certain trains (esp. rush hour S-Bahn/regional services) rather than the availability of tangible frills in contrast to second class. 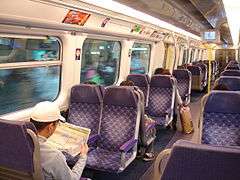 First Class compartments are available on trains serving the MTR East Rail Line (formerly KCR East Rail) even after the line was electrified and modernized in the early 1980s (then known as the Kowloon-Canton Railway British Section). As of 2013 it is the only railway line in the territory to offer a first class service.

The term "First Class" was abolished on Japanese National Railways in May 1969, and was replaced by "Green cars". Green cars are identifiable by the green four-leaf clover logo at the doorways. Usually they are in 1-2 configuration, with 2-2 configuration for Shinkansen trains, although more exclusive accommodations have also been introduced. In recent years, there has been a gradual trend to restore Green cars to longer-distance commuter lines in the Tokyo area, complete with "Green Attendants" who provide an at-seat refreshment service as well as checking tickets. On overnight trains, premium accommodations are known as A cabins, which may be couchettes, private rooms or suites.

Nagoya Railroad (Meitetsu) refers to its first-class coaches as its "myu-ticket" (ミューチケット) service. These coaches are somewhat more comfortable than economy class and include assigned seating.

The term "First Class" is not used as such by the Russian Railways, which has its own class system, but is commonly employed to translate the corresponding Russian term "SV" ("СВ" or "Спальный вагон", literally "Sleeping Car"). Note that while technically most cars in Russian long-distance trains are sleepers (i.e. berths rather than seats), the term is used only for the first-class cars. Such cars usually have 8 or 9 two-berth compartments with transversely mounted soft couches and a TV set, two toilets on different ends of the car, and a communal shower room (in 8-compartment cars). There is also a deluxe version of the SV car, usually dubbed "Premium", which features one-berth (or two-berth with foldable upper berth) compartments with a built in toilet/shower and better furnishing. This deluxe variant is sometimes informally referred to as "Myagky Vagon" (literally "Soft Car"), though this is a misnomer, as historically such designation indicated the intermediate between the SV and Coupe classes, long since discontinued, and referred to the better furnishing and softer padding of the berths as compared to the traditional Coupe class.

The service is usually the same in all classes on Russian Railways, the main difference being the increased personal space, reduced noise, and better isolation from unwanted contact with strangers, as well as better amenities; lower class cars may have a single shower per two couchette cars (54 passengers), while SV cars have one per 16 passengers, and in a Premium car each passenger has their own shower, an important consideration on lines such as the Trans-Siberian on which travel may last for up to a full week. 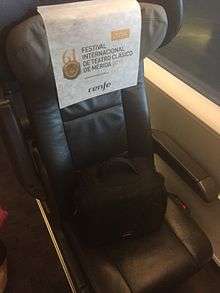 First Class travel is not available on short distance trains in Spain such as the Regionales or Cercanias services, but on long- and medium-distance trains such as the Altaria or Euromed services "Preferente" class, comparable to British first class is available. This includes complimentary food and drinks (typically a welcome-aboard drink, including champagne, and drinks with the meal) as well as larger seats.

It is worth pointing out that on all Spanish "Grandes Líneas" (long haul) and Media Distancia (medium haul) trains, video and music is available and accessed through complimentary headphones. Additionally notable is the cost of first-class travel. Prices are basically not discounted other than for off-peak times of day and the price of a "preferente" ticket is normally only €30 - 40 more than economy, and club class on the AVE is normally only €40 more than "preferente" - significantly cheaper than most first class fares in Britain. 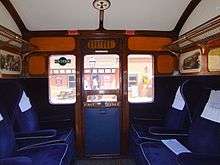 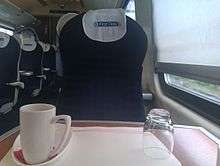 The existence and nature of different classes of passenger service on British trains has varied over time. From its inception, first, second, and third class carriages were provided, alongside luxury Pullman coaches. Currently, most longer-distance services offer first-class and standard-class service, while most local and suburban services are single class - as are urban transit services such as the London Underground.

First-class service offers access to dedicated first-class sections of the train, nearly always featuring fewer but larger, and more comfortable seats, in a generally more spacious arrangement that provides more personal space, often a table and upgraded decor/carpeting, and in some cases additional amenities (such as power outlets for mobile phones or laptop computers).

In addition to the dedicated seating, the current first-class rail experience may include access to a lounge (at major departure and/or arrival stations) and additional on-board services, such as food and/or drinks service, complimentary newspapers, etc. Such on-board services vary widely; they can be distributed by train operating company, by route, by day of week (weekday or weekend), and by time of day. The most complete first-class experience is offered by long-distance train operators, such as East Coast and Virgin Trains and also the Arriva Trains Wales "North-South Premier Service", especially on weekday morning and evening trains on high-volume routes, where it is targeted at business travelers.

On busy commuter services First Class seating is similar or identical to Standard class. However its much higher cost ensures the First Class ticket holder a better chance of finding a seat. Some Train Operating Companies offer First Class fares that are often nearly double the fare of Standard class. On some services despite the existence of a first class cabin, it is "declassified" indicating that any ticket holder may sit there, and first class tickets are usually not sold.

First-class service is offered on overnight sleeper trains between London and Scotland (refer to Caledonian Sleeper) and London and the West Country (refer to Night Riviera).

Eurostar international trains between Great Britain and continental Europe offer two distinct first-class services, which they call Business Premier and Standard Premier respectively, in addition to standard class. The on-board accommodation is the same; the difference is a greater flexibility, a shorter check-in time and more extensive catering (a full meal instead of a lighter snack) for the Business Premier service. Standard Premier was introduced on September 1, 2010; formerly, this service was called Leisure Select and also included a full meal catering.

From 1863, George Pullman introduced comfortable long-distance rail cars from, what was to become the Pullman Palace Car Company, founded in 1867.[3]

Today, on Amtrak services, first-class travel is available on the Acela Express service, as well as long distance services operated with Superliner or Viewliner stock. Passengers also have access to special waiting rooms at many cities and high-traffic stations. First class on the Acela Express service has wider seats than the standard business class (44 vs. 65 seats per carriage), in-seat electrical outlets, a carriage attendant, and complimentary meals and beverages.[4] On the long distance services sleeping accommodation is provided, including Roomettes, Bedrooms, Bedroom Suites, and Accessible Bedrooms. Many rooms include a shower and toilet; for other rooms a toilet and/or shower is located nearby. Meals and other hotel-style services are also included in the price.[5]