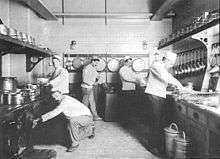 Galley of the Austrian passenger ship S.S. Africa on the Mediterranean Sea about 1905. 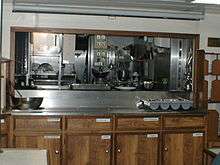 Galley of the Sail Training ship Stavros S Niarchos in 2010

The galley is the compartment of a ship, train, or aircraft where food is cooked and prepared. It can also refer to a land-based kitchen on a naval base, or to a particular design of a household kitchen.

A galley is the kitchen aboard a vessel, usually laid out in an efficient typical style with longitudinal units and overhead cabinets. This makes the best use of the usually limited space aboard ships. It also caters for the rolling and heaving nature of ships, making them more resistant to the effects of the movement of the ship. For this reason galley stoves are often gimballed, so that the liquid in pans does not spill out. They are also commonly equipped with bars, preventing the cook from falling against the hot stove.

A small kitchen on deck was called a caboose or camboose, originating from the Dutch: kombuis, which is still in use today. In English it is a defunct term used only for a cooking area that is abovedecks.[1] 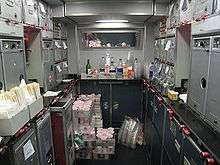 The Douglas Aircraft DC-3 was the first airplane with a planned galley for food service.[2]

Galleys on commercial airlines typically include not only facilities to serve and store food and beverages, but also contain flight attendant jumpseats, emergency equipment storage, as well as anything else flight attendants may need during the flight. Aircraft in operation today mainly use the familiar airline service trolley system.

Airbus has developed a new galley concept called SPICE, presented 2010, which they publicise as a potential new worldwide standard with significant advantages over the current 40-year-old trolley technology.[3]

The first airplane kitchen was invented (patented) by Werner Sell (Georg Robert Werner Sell) of Germany in 1930; the first fitted kitchens were delivered 1954, by 1955 Lufthansa had all their commercial planes fitted with a Sell galley. In 1955 Sell also began fitting train coaches with kitchens, from 1960 on with the newly developed convection oven. 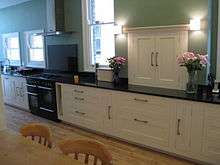 Example of a Galley (kitchen) that has been hand fitted by a carpenter.

The term Galley kitchen is also used to refer to the design of household kitchen wherein the units are fitted into a continuous array with no kitchen table, allowing maximum use of a restricted space, and work with the minimum of required movement between units. Such kitchens increase storage space by working vertically, with hanging pots, dish racks, and ceiling-hung cabinets common. Strictly, the term refers to a kitchen with the units in two facing lines, but is often used to refer to U-shaped kitchens as well.

The first mass-produced galley kitchen design was known as the Frankfurt kitchen, designed by Margarete Schütte-Lihotzky, working under the direction of Ernst May in 1926 for a Frankfurt housing estate. 10,000 units were installed in Frankfurt, and it was the most successful and influential kitchen of the period.