This article is about the airport location. For the song by Miranda Lambert, see "Baggage Claim". For the 2013 film, see Baggage Claim (film). 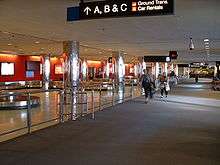 In airport terminals, a baggage reclaim area is an area where arriving passengers claim checked-in baggage after disembarking from an airline flight.[1] The alternative term baggage claim is used at airports in the USA.[1]

Some airports required that passengers display their baggage check receipt so that it can be positively matched against the bag they are trying to remove from baggage claim. This serves two purposes: first it reduces baggage theft, and secondly it helps to prevent passengers from accidentally leaving the airport with another passenger's bag that bears resemblance to their own.

For international arrivals, the baggage reclaim area is a restricted area, after immigration control and before clearing customs, so that all baggage can be inspected by customs agents,[2] but the passenger does not have to handle heavy baggage while moving through the passport booth. In the United States and Canada, and also in some airports in Asia, all arriving international passengers' baggage is claimed here and can be re-surrendered to the airline for connecting flights on the other side of customs (for connection from international to domestic flights in most countries, all passengers must claim their baggage). In most other countries passengers transferring to an onward flight do not need to collect their bags unless their airline does not offer to check their bags to their final destination. This is required in American and some Canadian airports because international terminals are not enclosed (the only exit being through customs) and often serve domestic flights. The same rule applies in the case of airports that have U.S. border preclearance facilities. This means that passengers continuing onto the U.S. from other cities must retrieve their checked baggage first, then re-check them after clearing U.S. Customs.

Depending on the airport, the domestic baggage reclaim area may be located next to or shared with the international reclaim area, or sometimes located in the public part of the airport alongside car rental desks and airport exits, and only passengers at their final destination claim their bags here. In most large airports in the United States and in some small ones as well, the domestic baggage reclaim is located on a different floor than the ticket counter, usually lower.

A panoramic view of the Baggage reclaim area in Hong Kong International Airport.