About 89.4% of the people of Romania are ethnic Romanians, whose language, Romanian, is an Eastern Romance language, descended primarily from Latin with some Bulgarian, Serbian, German, Greek, Hungarian and Turkish borrowings. Romanians are by far the most numerous group of speakers of an Eastern Romance language today. It has been said that they constitute "an island of Latinity"[4] in Eastern Europe, surrounded on all sides either by Slavic peoples or by the Hungarians.

The Hungarian minority in Romania constitutes the country's largest minority, 6.1 per cent of the population.[5]

Romania's population declined steadily in recent years, from 21.7 million in 2002 to 19.9 million in 2014.[6] More specifically, in the last decade, the population of Romania decreased by 7.5%, the most important moment for the country's demography being 2008, when the number of inhabitants dropped by 600,000 people.[7] Among the causes of population decline are high mortality, low fertility rate after 1989, and emigration.[6]

For the entire period 1990–2006 estimated population loss tops 1.5 million. But it is likely to be higher, given the explosion of migration for work after 2001 and the tendency of some migrants to settle permanently in the countries where they live.[8] 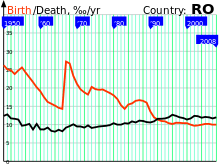 A huge surge of the birth rate in 1967 is the most prominent feature of these graphs.

Sources give varied estimates for Romania's historical population. The National Institute for Research and Development in Informatics (NIRDI) gives the following numbers: 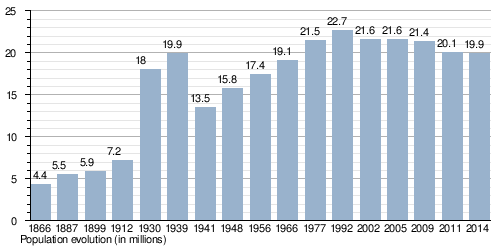 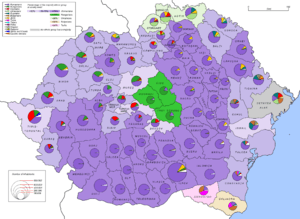 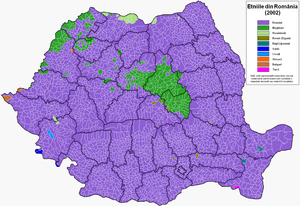 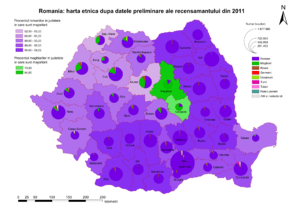 Ethnicity in Romania by county (%) based on 2002 census data

Before World War II, minorities represented more than 28% of the total population. During the war that percentage was halved, largely by the loss of the border areas of Bessarabia and northern Bukovina (to the former Soviet Union, now Moldova and Ukraine) and southern Dobrudja (to Bulgaria). Two-thirds of the ethnic German population either left or were deported after World War II, a period that was followed by decades of relatively regular (by communist standards) migration. All these left behind a population of 60,000 ethnic Germans in Romania today. Of a total official population of over three quarter million Jews before World War II, more than half were killed during the Holocaust.[9] Mass emigration, mostly to Israel and United States, has reduced the surviving Jewish community to less than 6,000 in 2002(it is estimated that the real numbers could be 3-4 times higher).[10]

Hungarians (Magyars; see Hungarians in Romania), especially in Harghita, Covasna, and Mureș counties, and the Roma are the principal minorities, with a declining German population (Banat Swabians in Timiș; Transylvanian Saxons in Sibiu, Brașov and elsewhere), and smaller numbers of Czechs, Slovaks, Serbs, Chinese, Croats, and Banat Bulgarians (in Banat), Ukrainians (especially in Maramureș and Bukovina), Greeks of Romania (especially in Brăila and Constanța), Turks and Tatars (mainly in Constanța), Armenians, Russians (Lipovans, Old Believers in Tulcea), Jews and others. Since the Romanian Revolution of 1989, Bucharest has again become an increasingly cosmopolitan city, including identifiable Chinese and Irish presences. Minority populations are greatest in Transylvania and the Banat, areas in the north and west of the country, which were part of the Kingdom of Hungary (after 1867 the Austria-Hungary) until the end of World War I. Even before the union with Romania, ethnic Romanians comprised the overall majority in Transylvania. However, ethnic Hungarians and Germans were the dominant urban population until relatively recently, while Hungarians still constitute the majority in Harghita and Covasna counties. 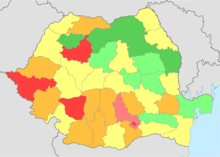 Between WWI and WWII

During the period of January–March 2013 the natural increase was :

The following demographic statistics are from the CIA World Factbook, unless otherwise indicated.

As a consequence of the pro-natalist policies of the Nicolae Ceaușescu regime (see Decree 770), Romania has a higher proportion of people born in the late 1960s and 1970s its population than any other Western country except Slovenia. The generations born in 1967 and 1968 were the largest, although fertility remained relatively high until 1990. 8.55% of the Romanian population was born in the period from 1976 to 1980, compared with 6.82% of Americans and 6.33% of Britons.[15] 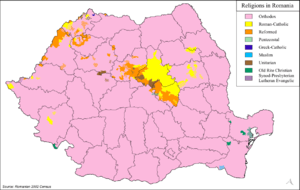 Distribution of religions in Romania

Religious affiliation tends to follow ethnic lines, with most ethnic Romanians identifying with the Romanian Orthodox Church. The Greek Catholic or Uniate church, reunified with the Orthodox Church by fiat in 1948, was restored after the 1989 revolution. The 2002 census indicates that 0.9% of the population is Greek Catholic, as opposed to about 10% prior to 1948. Roman Catholics, largely ethnic Hungarians and Germans, constitute 4.7% of the population; Calvinists, Baptists (see Baptist Union of Romania and Convention of the Hungarian Baptist Churches of Romania), Pentecostals, and Lutherans make up another 5%. There are smaller numbers of Unitarians, Muslims, and other religions.