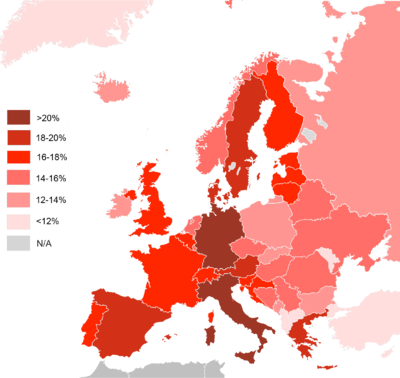 Percentage of the population over 65 in Europe

Giuseppe Carone and Declan Costello of the International Monetary Fund projected in September 2006 that the ratio of retirees to workers in Europe will double to 0.54 by 2050 (from four workers per retiree to two workers per retiree).[1][2] William H. Frey, an analyst for the Brookings Institution think tank, predicts the median age in Europe will increase from 37.7 years old in 2003 to 52.3 years old by 2050 while the median age of Americans will rise to only 35.4 years old.

The Organisation for Economic Co-operation and Development estimates 39% of Europeans between the ages of 55 to 65 work. If Frey's prediction for Europe's rising median age is correct, Europe's economic output could radically decrease over the next four decades.[3]

Austria's Social Affairs Minister said in 2006 that, by 2010, the 55- to 64-year-old age bracket in the European Union would be larger than the 15- to 24-year-old bracket. The Economic Policy Committee and the European Commission issued a report in 2006 estimating the working age population in the EU will decrease by 48 million, a 16% reduction, between 2010 and 2050, while the elderly population will increase by 58 million, a gain of 77%.

The causes of population ageing vary among countries.

There have been mixed feelings over their population's higher life expectancy and declining birth rate ever since the European countries were the first to start the demographic transition between the 18th and 19th century and perhaps even more since they've achieved it. Demographic studies and resultant reports conducted by the European Commission[5] point to the declining birth rate of the population of the native European peoples, which would need to be reversed from its present level of about 1.4 in order to preclude a population decline of the native European peoples by nearly half in each generation, back to a replacement level of 2.1. Some have claimed that in order to achieve this reverse, it is necessary to allow migrants to settle in the Europe in order to prevent labour shortages. It has been argued that immigration leads to ethnic conflicts, such as the 2005 civil unrest in France.[6][7][8]

The Belgian government spent 9.1% of its GDP on pensions and 7.1% on health care expenses in 2005. By 2050 total social spending is expected to increase by 5.8%, assuming there is no change in the age of retirement. Most of this higher social spending comes from pension and health care, rising by 3.9% to 13.0% of GDP and 3.7% to 10.8% of GDP respectively.

The decline in the workforce will partly compensate by lowering unemployment which will in turn lower the cost of childcare.[9] The IMF also predicts that by 2050 the percentage of Belgian population over the age of 65 will increase from 16% to 25%.[10]

France overtook Ireland as the European Union member state with the highest birth-rate in 2007.[11] Projected birth rates indicate that France will have the largest population in the EU by 2050, with 75 million citizens, ahead of Germany.[12] In 2011, France was the only European Union member with a fertility rate at replacement level, with an average rate of 2.08 children per woman while Ireland's fertility rate declined to 2.01 children per woman, slightly below replacement level.[13]

With 82 million inhabitants in January 2010,[15] Germany is the most populous country in the European Union. However, its fertility rate of 1.42 children per woman is one of the lowest in the world,[13] and the federal statistics office estimates the population will shrink to between 65 and 70 million by 2060 (65 million assuming a net migration of +100,000 per year; 70 million assuming a net migration of +200,000 per year).[16] With death rates continuously exceeding low-level birth rates, Germany is one of a few countries for which the demographic transition model would require a fifth stage in order to capture its demographic development.[17] In Germany, the population in some regions, especially the former Communist East, is undergoing a current decline and depopulization. The Bauhaus Dessau Foundation came up with comprehensive plans to tear down numerous buildings and replace them with parks in various cities[7] and the Government of Germany developed a plan to reduce at great expense the width of sewer pipes in various cities. The southern states however have net gain in population and Germany as the economic powerhouse of the EU is attracting immigrants overall.

Italy will need to raise its retirement age to 77 or admit 2.2 million immigrants annually to maintain its worker to retiree ratio.[18] About 25% of Italian women do not have children while another 25% only have one child.

The region of Liguria in northwestern Italy now has the highest ratio of elderly to youth in the world. Ten percent of Liguria's schools closed in the first decade of the 21st century. The city of Genoa, one of Italy's largest and the capital of Liguria, is declining faster than most European cities with a death rate of 13.7 deaths per 1,000 people, almost twice the birth rate, 7.7 births per 1,000 people, as of 2005.

The Italian government has tried to limit and reverse the trend by offering financial incentives to couples who have children, and by increasing immigration. While fertility has remained stagnant, immigration has minimised the drop in the workforce.[19]

Portugal's population census of 1994 found that 13.1% of the population was above the age of 65. Average life expectancy for Portuguese increased by eight years between the 1980s and the first decade of the 21st century.[20]

Recent studies in the newspaper "Público" showed that the population may shrink to 7.5 millions (−29% of the current population, −0.7% of average populational growth per year) in 2050, if the fertility rate continues at 1.45 children/woman; taking into account the almost stationary emigration due to the economic crisis. In 2011, Portugal's fertility rate reached 1.51 children per woman, stemming the decline in the nation's fertility rate, although it is still below replacement level.[13]

In 1999, Rocío Fernández-Ballesteros, Juan Díez-Nicolás, and Antonio Ruiz-Torres of Autónoma University in Madrid published a study on Spain's demography, predicting life expectancy of 77.7 for males and 83.8 for females by 2020.[22] Arup Banerji and economist Mukesh Chawla of the World Bank predicted in July 2007 that half of Spain's population will be older than 55 by 2050, giving Spain the highest median age of any nation in the world. 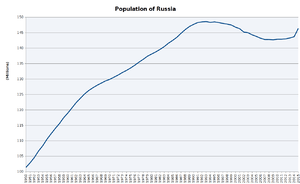 The current Russian total fertility rate of 1.7 children per woman.[25] While this represents an increase over previous rates, it remains sub-replacement fertility, below the replacement rate of 2.10 - 2.14.

In 2006 a national programme was developed with a goal to reverse the decline by 2020. A study published shortly after in 2007 showed that the rate of population decrease had slowed: According to the study, deaths exceeded births by 1.3 times, down from 1.5 times in the previous year, thus, if the net decrease in January–August 2006 was 408,200 people, in the same period during 2007 it was 196,600. The decline continued to slow in 2008 with only half the population loss compared to 2007. The reversal continued at the same pace in 2009 as death rates continued to fall, birth rates continued to rise and net migration stayed steady at about 250,000; in 2009 Russia saw population growth for the first time in 15 years.[28][29] 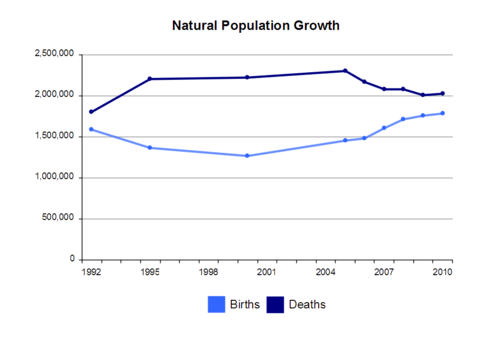 The number of Russians living in poverty has halved since the economic crisis following the breakup of the Soviet Union, and the improving economy has had a positive impact on the country's low birth-rate, as it rose from its lowest point of 8.27 births per 1000 people in 1999 to 11.28 per 1000 in 2007.[15][32] Russian Ministry of Economic Development hopes that by 2020 the population will stabilise at 138–139 million, and that by 2025 it will begin to increase again to its present-day status of 142–145, also raising the life expectancy to 75 years.[33]

The two leading causes of death in Russia are heart disease and stroke, accounting for about 52% of all deaths.[34] While cardiovascular disease-related deaths decreased in Japan, North America, and Western Europe between 1965 and 2001, in Russia CVD deaths increased by 25% for women and 65% for men.

The percentage of infertile, married couples rose to 13% in the first decade of the 21st century, partially due to poorly performed abortions. According to expert Murray Feshbach 10–20% of women who have abortions in Russia are made infertile, though according to the 2002 census, only about 6–7% of women have not had children by the end of their reproductive years.[35][36]

Provincial governments have begun offering special incentives to couples who procreate. In 2005 Sergei Morozov, the Governor of Ulyanovsk, made 12 September a provincial holiday, the "Day of Conception," on which couples are given half of the work day off to copulate.

Mothers who give birth on 12 June, Russia's national day, are rewarded with money and expensive consumer items. In the first round of the competition 311 women participated and 46 babies were born on the following 12 June. Over 500 women participated in the second round in 2006 and 78 gave birth. The province's birth rate rose 4.5% between 2006 and 2007.[37]

Large-scale immigration is suggested as a solution to declining workforces in western nations, but according to the BBC, would be unacceptable to most Russians. Organizations like the World Health Organization and the UN have called on the Russian government to take the problem more seriously, stressing that a number of simple measures such as raising the price of alcohol or forcing people to wear seat belts might make a lasting difference.[27] In January 2010, in an effort to combat bootlegged vodka, the government set a minimum price for vodka, more than doubling the cost of the cheapest vodka on the market which is often much more hazardous to consume than legal vodka.[38]

Then-President Vladimir Putin said in a state of the nation address that "no sort of immigration will solve Russia's demographic problem". Yevgeny Krasinyev, head of migration studies at the state-run Institute of Social and Economic Population Studies in Moscow, said Russia should only accept immigrants from the Commonwealth of Independent States, a view echoed by Alexander Belyakov, the head of the Duma's Resources Committee.

Migration in Russia grew by 50.2% in 2007, and an additional 2.7% in 2008, helping stem the population decline. Migrants to Russia primarily come from CIS states and are Russians or Russian speakers.[39] Thousands of migrant workers from Ukraine, Moldova, and the rest of the CIS have also entered Russia illegally, working but avoiding taxes.[40] There are an estimated 10 million illegal immigrants from the ex-Soviet states in Russia.[41]

Central Europe and the Former USSR

The World Bank issued a report on 20 June 2007, "From Red To Grey: 'The Third Transition' of Aging Populations In central Europe and the Former Soviet Union," predicting that between 2007 and 2027 the populations of Georgia and Ukraine will decrease by 17% and 24% respectively.[42] The World Bank estimates the population of 65 or older citizens in Poland and Slovenia will increase from 13% to 21% and 16% to 24% respectively between 2005 and 2025.[26]