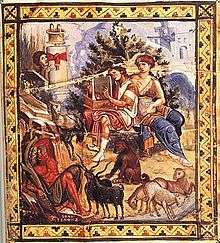 David playing his harp (unknown artist, c. 960). The book of Psalms, included in the Jewish and Christian scriptures, and said to have been written largely by David, is one of the earliest collections of sacred music, and still plays a role in the liturgies of the two religions.

According to some scholars, the earliest music in the Christian Church came from Jewish worship music, with some additional Syriac influence.[1] It is believed that this music lay somewhere between singing and speaking, or speaking with an understood ritual cadence.[2] However, there is another opinion that the roots of early Christian music come from the early ascetic monastic orders.[3]

Hindu music is music created for or influenced by Hinduism.

The earliest synagogal music was based on the same system as that in the Temple in Jerusalem. According to the Talmud, Joshua ben Hananiah, who had served in the sanctuary Levitical choir, told how the choristers went to the synagogue from the orchestra by the altar (Talmud, Suk. 53a), and so participated in both services.

Shintō music (神楽) is ceremonial music for Shinto (神道) which is the native religion of Japan.

Buddhist music is music for Buddhist ceremony or meditation.

Zoroastrian music is a genre of music that accompanies Zoroastrian traditions and rites.