The University of Missouri is in Columbia.

Boone County was organized November 16, 1820, from a portion of the territorial Howard County. The area was then known as Boone's Lick Country, because of a salt lick which Daniel Boone's sons used for their stock.

Boone County was settled primarily from the Upper South states of Kentucky, Tennessee and Virginia. The settlers brought slaves and slave-holding with them, and quickly started cultivating crops similar to those in Middle Tennessee and Kentucky: hemp and tobacco. Boone was one of several counties settled by Southerners to the north and south of the Missouri River. Because of its culture and traditions, the area became known as Little Dixie, and Boone County was at its heart.[4] In 1860 slaves made up 25 percent or more of the county's population, and Little Dixie was strongly pro-Confederate during the American Civil War.[5]

Like nearly all counties nationwide with a major university, the Democratic Party predominantly controls politics at the local level in Boone County. Democrats currently hold all of the elected positions in the county.

Boone County is divided into five legislative districts in the Missouri House of Representatives, two of which are held by Democrats and three held by Republicans.

All of Boone County is a part of Missouri’s 19th District in the Missouri Senate and is currently represented by Kurt Schaefer (R-Columbia).

All of Boone County is included in Missouri’s 4th Congressional District and is currently represented by Vicky Hartzler (R-Harrisonville) in the U.S. House of Representatives. 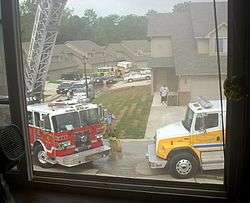 The BCFPD at a working structure fire.

Prior to 1964, there was no organized fire protection in Boone County. This changed after an elderly handicapped woman died in a house fire just west of the city limits of Columbia. A small group of CB radio enthusiasts, known as the Central Missouri Radio Squad, banded together to develop a fire protection system for Boone County.[18]