Maryville is a city and county seat of Nodaway County, Missouri, United States.[1] As of the 2010 census, the city population was 11,972.[8][9] Maryville is home to Northwest Missouri State University, Northwest Technical School, and the Missouri Academy of Science, Mathematics and Computing.

Maryville is the second largest city (first is St. Joseph, Missouri) wholly within the boundaries of the 1836 Platte Purchase which expanded Missouri's borders into former Indian Territory in northwest Missouri.

The first post master in Maryville was Amos Graham. Graham was one of the first settlers in what became downtown Maryville. The city is named for his wife Mary.[11] Graham was one of the original Nodaway County Commissioners and its first county clerk when the county was organized in 1845. Maryville, which is near the geographic center of Nodaway County, was also named the county seat in 1845.[12][13]

The first courthouse was built in 1846 (county government was earlier held in the home of early settler I.N. Prather's home south of Maryville which had the post office name of Reindeer). A new courthouse was built in 1853. The existing courthouse was built in 1881 with a design by Edmond Jacques Eckel and George R. Mann (who designed the Arkansas State Capitol).[14] The current courthouse is on the National Register of Historic Places.[15] The original court complex included one of the country's only rotary jails. The jail was torn down in 1984 and replaced with a new structure on the same site.[16] A sculpture of a pineapple, the sign of welcome, is atop the courthouse.

In 1872 Albert P. Morehouse started the Nodaway Democrat, which became the Maryville Daily Forum. Morehouse would become governor. He lived in a house on Vine Street. Coincidentally, the house would later be occupied by Forrest C. Donnell before Donnell became a governor and U.S. Senator. The Forum was a chain-owned newspaper for nearly 100 years and in 2013 it reverted to local ownership by the Cobb Group.

In 1889 the Maryville Methodist Seminary opened.

In 1891 Elizabeth Howell (who operated Howell Millinery in Maryville) contributed to the development of the Lazy Susan when she received an American patent for "certain new and useful Improvements in Self-Waiting Tables". Howell's device ran more smoothly and did not permit crumbs to fall into the space between the Lazy Susan and the table.[18]

In 1901 the horse Elwood was foaled at Faustiana Farms, owned by Mrs. J.B. Prather, on the west side of Maryville. It won the Kentucky Derby in 1904 and was the first Derby winner to be bred by a woman. Faustiana was located where the Maryville Country Club is today. Mrs. Prather also has connections with the second horse to be owned and bred by a woman to win the Derby -- Black Gold in 1924 which was the great grand child of Faustus the namesake of the Faustiana farm.[19] Elwood and Black Gold are two of 10 Kentucky Derby winners with Nodaway County connections. Trainer Ben A. Jones won the Derby in 1938, 1941, 1944, 1948 1949 and 1952. His son Jimmy Jones won in 1957 and 1958. They operated a horse farm at Parnell, Missouri until their deaths (although their racing fame is tied to Calumet Farm in Kentucky). Jimmy died in Maryville in 2001. Memorabilia from their horse racing days are St. Francis Hospital and at the Nodaway County Historical Society Museum.

In 1905 Maryville won a contest to get the Fifth District Normal School which would become Northwest Missouri State University. It offered $58,672 and 86 acres (35 ha) including the Methodist Seminary to the state. The college was on the northeast corner of the city near adjoining the Wabash train station. The most significant structure on the land transferred to the state was the Thomas Gaunt mansion which is also on the National Register and is the college President's residence.[20] Gaunt owned an extensive nursery on his property which was on a birch lined street and it is now the Missouri Arboretum. The most recognizable building on the campus today is the Administration Building[21] designed by John H. Felt. It is on the National Register and resembles Brookings Hall at Washington University which was the Administration Building of the 1904 World's Fair in St. Louis, Missouri.

In 1928 there was speculation that Maryville would become the "Western White House" for Herbert Hoover when it was discovered that he owned a farm 15 miles south of town. The farm was actually only 80 acres and he had acquired it after holding the mortgage for his Stanford University Class of 1895 roommate Samuel Wilson Collins. It was Iowa-native Hoover's only farm and Hoover visited it in 1933 after leaving office. He was accompanied by his former Secretary of Agriculture Arthur M. Hyde.[22] Hoover's vice president Charles Curtis visited Maryville on October 4, 1932 where spoke at the Administration Building after being rained out of a planned appearance at the Courthouse.[23]

Harry S. Truman (along with Bess Truman and Margaret Truman) made the last of several visits to Maryville on August 3, 1962 when he dedicated the current post office.[24] Truman had extensive ties to Maryville. During World War I Truman was a member of the 129th Field Artillery Regiment in the Missouri National Guard which is headquartered in Maryville. Truman commanded Battery D in the war of the 129th. The 129th official motto is "Truman's Own" because of the affiliation. During the Meuse-Argonne Offensive during World War I in 1918 Truman prophetically told his troops, ""Right now, I'm where I want to be -- in command of this battery. I'd rather be here than president of the United States."[25] Among the original 129th soldiers was Edward V. Condon (1893-1974) who later operated the Condon Corner Drug Store across the street on the Square after the war.[26] Truman dedicated the 129th's armory on the northwest side of Bearcat Stadium on the college campus on February 20, 1955.[27][28] The 1955 armory was repurposed as the Jon T. Rickman Electronic Campus Support Center in 2003 when a new armory was built further west of the campus near the Maryville Country Club which is site the original Faustiana Farm complex.[29] Many of Maryville's most active citizens have ties to the 129th including Leigh Wilson (1881-1978) who rose to rank of Brigadier General. Wilson who operated the Wilson Motel in Maryville as well as Hitching Post restaurant was one of the biggest proponents for broadening Maryville's economic base away from just the college.[30]

Truman's sister Mary Jane Truman, who was active in the Order of Eastern Star, visited Maryville and Nodaway County several times for Eastern Star events before, during and after the Truman presidency.[31]

In 1987 the Palms Bar in town began sponsoring the "World's Shortest Saint Patrick's Day Parade." The parades which are less than a block long have been getting shorter each year as other towns compete for the title. One of the mainstays of events has been a garbage truck driving down the street at the beginning pouring out buckets of green water as a Maryville homage to the dying of the Chicago River green.[32] In 2015 the parade moved from being a block off the square to actually being on the square after it became sponsored by Burny's Sports Bar.[33]

In 1994 Mozingo Lake opened east of Maryville. Its Mozingo Lake Golf Course has courses designed by Donald Sechrest and Tom Watson (which opened in 2016).[34]

In 1996 the Maryville Treatment Center, a minimum security prison, opened in a renovated Franciscan Sisters of Mary Motherhouse which had been built in 1947 and has a landmark yellow steeple on the bluffs above the One Hundred and Two River on the east side of Maryville.

In 2002 the principal highway through Maryville US Route 71 was converted to a 4-lane from Savannah, Missouri and a bypass was built along the east side of Maryville. 71 is at least a 4-lane and some cases an interstate highway for the entire length of Missouri from the Arkansas border and there had been considerable delays in converting the last remaining 2 lane section from Savannah to Maryville. US 71 north of Maryville to the Iowa border is the only remaining 2 lane portion of 71 in Missouri,

In 1931, a notorious lynching occurred in Maryville when a mob burned alive African American Raymond Gunn, who had confessed to killing and attempting to rape a 20-year-old white school teacher. The lynching attracted national attention and was frequently invoked in the unsuccessful campaign to pass the Costigan-Wagner Bill, which would have made it a federal crime for law enforcement officials to refuse to try to prevent a lynching.[36][37][38][39]

A controversial case arose in 2012 when Matthew Barnett, 17 at the time, was arrested for the sexual assault of a 14-year-old girl named Daisy Coleman. Another Maryville High senior, Jordan Zech, 17, was also charged with felony sexual exploitation of a minor because he videotaped Barnett and the girl on an iPhone. A significant controversy arose in 2013 when the prosecution dropped felony charges against Barnett, grandson of the former state representative Rex Barnett.[40][41]

Outrage in online communities soon followed when the story surrounding this case was revisited in October 2013.[42] Michael Schaffer, reporting on the incident for The New Republic, described Maryville as a "lawless hellhole".[43] In 2014, a special prosecutor was put in charge to reinvestigate the case. Barnett pleaded guilty to misdemeanor second-degree endangerment of the welfare of a child for leaving her outside of her house.[44][45] Barnett was sentenced in juvenile court for the assault.[46] The incident is featured in the 2016 Netflix documentary Audrie & Daisy.

The One Hundred and Two River, located on the eastern side of the city, is the primary source of power and water for the city.

There were 4,217 households of which 20.4% had children under the age of 18 living with them, 33.7% were married couples living together, 7.6% had a female householder with no husband present, 2.9% had a male householder with no wife present, and 55.8% were non-families. 35.5% of all households were made up of individuals and 11.8% had someone living alone who was 65 years of age or older. The average household size was 2.16 and the average family size was 2.82.

There were 3,913 households out of which 20.8% had children under the age of 18 living with them, 37.4% were married couples living together, 7.2% had a female householder with no husband present, and 53.1% were non-families. 35.3% of all households were made up of individuals and 11.2% had someone living alone who was 65 years of age or older. The average household size was 2.16 and the average family size was 2.83. 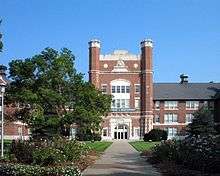 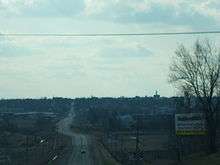 Maryville has ten city parks, which includes six baseball fields, several soccer and American football fields, a skate park, a nature park, and the Maryville Aquatic Center. The city also maintains the Mozingo Lake Park and Golf Course. The golf course consists of 18 holes and is situated about the lake.

The city of Maryville is governed by a city council consisting of five members who are elected at-large and serve terms of three years. There is no limit to the number of terms that one can serve on the council. Each year, one of the council members is selected to serve as the mayor of the city and another as the mayor pro tem.[2]

Maryville is also served by

Maryville is served by the Northwest Missouri Regional Airport, which is a general aviation airport with no commercial service.

Maryville is home of St. Francis Hospital and Health Services.[52]