Jasper County is a county located in the southwest portion of the U.S. state of Missouri. As of the 2010 census, the population was 117,404.[1] Its county seat is Carthage,[2] and its largest city is Joplin. The county was organized in 1841 and named for William Jasper, a hero of the American Revolutionary War.

Jasper County is included in the Joplin, MO Metropolitan Statistical Area. The Jasper County Sheriffs office has jurisdiction throughout the county. 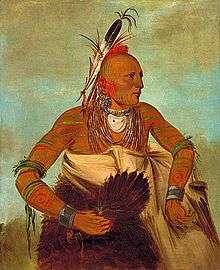 Portrait of an Osage warrior, painted by George Catlin in 1834.

Before European contact, the area that today makes up Jasper County was the domain of the Osage Native Americans who called themselves the Children of the Middle Waters (Ni-U-Kon-Ska).[3] This was probably because their dominion encompassed the land between the Missouri and Osage rivers to the north, the Mississippi River to the east, and the Arkansas River to the south. To the west were the Great Plains where they hunted buffalo. By the late 17th century, the Osage were calling themselves Wah-Zha-Zhe.

The earliest record of European-Osage contact is a 1673 map by French Jesuit priest and explorer Jacques Marquette. He noted the people he encountered as the Ouchage, his way of expressing the sound of the name with French spelling.[4] A few years after the Marquette expedition, French explorers discovered a Little Osage village and called it Ouazhigi.[5] French transliterations of the tribe's name settled on a spelling of Osage, which was also used by European Americans.[6]

In 1682 Robert de La Salle canoed down the length of the Mississippi River to the Gulf of Mexico, naming the entire Mississippi basin “La Louisiane” in honor of King Louis XIV. In 1699 Louisiana was named an administrative district of New France therefore, as far as the Europeans (France, England and Spain) were concerned, the area of Jasper County was French territory. The French further divided the Louisiana district into an upper and lower parts with the Arkansas River being the dividing line.

With France and Spain’s defeat in the Seven Years' War in 1763, France ceded Louisiana to Spain and most of the rest of New France to the British who also received Florida from Spain. The Spanish District of New Madrid, containing present day Jasper County, was the southernmost of the five Spanish districts comprising Upper Louisiana. France regained control of Louisiana through the secret Treaty of San Ildefonso in 1800 but Napoleon Bonaparte I decided to sell the territory to the United States in 1803.

The Osage began treaty-making with the United States in 1808 with the first cession of lands in Missouri in the (Osage Treaty). The Osage moved from their homelands on the Osage River in 1808 to the Jasper County area of Southwest Missouri. In 1825, the Osages ceded their traditional lands across Missouri, Arkansas, and Oklahoma. They were first moved onto a southeastern Kansas reservation in the Cherokee Strip, on which the city of Independence, Kansas now sits and finally to Indian Territory in 1872.

The Upper Louisiana Territory, including the Jasper County area, was renamed the Missouri Territory on June 4, 1812 to avoid confusion with the state of Louisiana which joined the Union in 1812, and the New Madrid District became New Madrid County. Old Lawrence County was established in 1815 from New Madrid County west of the St. Francis River and north of Arkansas County and consisted of all of present-day southwestern Missouri and part of northwestern Arkansas.

Lawrence County was short-lived, however, as three years later (1818) it was combined with part of Cape Girardeau County and renamed Wayne County. By 1819, Arkansas Territory had been created, and Wayne County lost some of its area but still consisted of most of southern Missouri from present-day Wayne County west to the Kansas State Line and south along the Arkansas State Line.

In 1820, all of Missouri Territory was admitted to the Union as the state of Missouri, and in 1831 Crawford County was carved out of the original Wayne. This new division covered all of the southern part of Missouri and included Jasper County in its boundaries. This alignment was also short-lived as in 1833 Greene County was split from Crawford County from the Niangua River west to the Kansas State Line.

On January 5, 1835, a big piece was cut out of Greene County and organized as Barry County. In 1838 Barry County was divided into four parts called Barry, Dade, Newton and Jasper counties. At this time Jasper was not a full-fledged county but was attached to Newton County and it would not be until 1841.

Log home of George Hornback, used as the initial Jasper County Courthouse in 1841. It has been preserved and can be viewed on the grounds of the Old Cabin Shop at 155 North Black Powder Lane, off of West Mound Street in Carthage.

On January 29, 1841, the Missouri Legislature enacted a bill authorizing the organization of Jasper County and was named in honor of Sergeant William Jasper, a hero in the American Revolutionary War.[7][8] The Jasper County Court first divided the area into three townships: North Fork, Center Creek and Marion, but later it was divided into 15 townships which remain in an unincorporated status to the present time.

A temporary seat of justice was established, Thursday, February 25, 1841 in the home of George Hornback. It was a 12×16 foot log cabin, one and a half miles northwest of Carthage on Spring River. The officers of the court were Charles S. Yancey, judge, and Elwood B. James, clerk. Mount Vernon attorney Robert W. Crawford was appointed circuit attorney pro tem. John P. Osborn, the first sheriff, was ordered to give public notice that the county court of Jasper County would meet in the home of George Hornback until the permanent seat of justice was established. The first session of the court was two days; the proceedings covered four pages of record.

A permanent county seat was chosen in March 1842 and designated by the name of Carthage. A one-story single-room wooden structure with a large door in the south, was completed on June 29, 1842, and was located on the north side of the present public square in Carthage. This courthouse was later replaced by a larger two-story brick-and-stone structure that was completed in 1854, which also functioned as the county jail. At the second term of the court held in October of the same year, attorneys Robert W. Crawford and John R. Chenault were cited for contempt and fined the sum of ten dollars for "fighting in the presence and view of said court during the said sitting."[9]

At the March 1861 Secession Convention held in Jefferson City, Chenault represented Jasper County while Crawford represented Lawrence County. Possibly for their own self-preservation, and to buy time to make preparations in Southwest Missouri for the inevitable war that would soon ravage both of these border counties, the two former adversaries voted in favor of keeping Missouri in the Union. Missouri was the only state to hold a convention on secession and then vote to remain in the Union.[10] 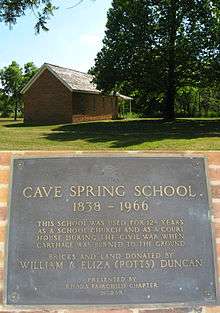 Cave Spring School, the site of Jasper County circuit court in 1865, is located at 4323 County Road 4 near La Russell.

At the outset of the war Chenault, by then a circuit court judge, moved with his family to Texas. Following the Battle of Carthage, on July 12, 1861 Crawford was elected Lieutenant Colonel of the 13th Missouri Cavalry Regiment and 5th Missouri Infantry, both of the 8th Division, Missouri State Guard.[11] After leading the 13th Cavalry Regiment into numerous battles, in a command that included two of his sons in first lieutenant and quartermaster ranks, Crawford moved his noncombatant family to Texas; he then served as a recruiter for the Confederate Army in Missouri, a post he was nominated for by Waldo P. Johnson, formerly a United States Senator from Missouri in a letter to Missouri governor-in-exile Claiborne Fox Jackson dated October 24, 1862.[12][13]

By the start of the American Civil War in 1861 there were several small river mill settlements, some mining camps and about nine or ten towns (seven platted) in Jasper County, Missouri. The county seat of Carthage, Missouri had an estimated population between four and five hundred at that time. The newer brick courthouse was used as a hospital during the American Civil War and was destroyed by fire during fighting in October 1863. By the end of the Civil War, Carthage had been evacuated and completely destroyed, and much of Jasper County laid in ruins. Other than military tribunals no courts were held in Jasper County between May 11, 1861 and October 10, 1865.

By order of the Governor in 1865, the courthouse was relocated to the pioneer schoolhouse at Cave Springs (near present-day La Russell, Missouri) with John C. Price of Mount Vernon appointed as the circuit court judge. Price later served as treasurer of the United States under President Buchanan.[14] Other temporary locations within the county were later used over the next three decades until the current Jasper County Courthouse was constructed on the Carthage square in the mid-1890s.[15]

The county adopted an official flag in 2001, which was unveiled during the county's 160th birthday celebration. The flag depicts the county courthouse surrounded by 15 stars representing Jasper County’s 15 townships. The center blue and red stars memorialize the struggle in Jasper County during the Civil War years, including the Battle of Carthage in 1861 and second battle in 1863.

Towns established prior to the Civil War

On Sunday, May 22, 2011 Jasper County was struck in Joplin with a catastrophic EF5 multiple-vortex tornado. The 2011 Joplin tornado ranked as the seventh deadliest in America's history.

There were 45,639 households out of which 30.8% had children under the age of 18 living with them, 48.7% were married couples living together, 12.4% had a female householder with no husband present, and 33.8% were non-families. 33.4% of all households were made up of individuals and 24.8% had someone living alone who was 65 years of age or older. The average household size was 2.52 and the average family size was 3.05

The Republican Party completely controls politics at the local level in Jasper County. Republicans hold every elected position in the county.

Jasper County is divided into four districts in the Missouri House of Representatives, all of which are held by Republicans.

All of Jasper County is a part of Missouri’s 32nd District in the Missouri Senate and is represented by Ron Richard (R-Joplin).

All of Jasper County is included in Missouri's 7th Congressional District and is represented by Billy Long (R-Springfield) in the U.S. House of Representatives.