Pulaski County is a county located in the U.S. state of Missouri. As of the 2010 census, the population was 52,274.[1] Its county seat is Waynesville.[2] The county was organized in 1833 and named for Kazimierz Pułaski, a Polish patriot who died fighting in the American Revolution.[3][4]

Pulaski County's earliest settlers were the Quapaw, Missouria and Osage Native Americans. After the Lewis and Clark Expedition of the early 19th century, white settlers came to the area, many from Kentucky, Tennessee and the Carolinas; the earliest pioneers appeared to have settled as early as 1818, and the town of Waynesville was designated the county seat by the Missouri Legislature in 1833. Like the county, Waynesville is also named after an American Revolutionary hero, Mad Anthony Wayne.

Waynesville Regional Airport at Forney Field serves the community with air service; even though it's on Fort Leonard Wood, it is jointly run by the cities of Waynesville and St. Robert and is available for civilian use by private pilots and scheduled commercial passenger service.

The major east-west route is

Interstate 44; before that, the main highway was

U.S. Route 66, which still exists as a scenic route through the area and passes through Devil's Elbow, St. Robert, Waynesville, Buckhorn, and Hazelgreen. Names for U.S. Route 66 vary - at different places, it's called Teardrop Road, Highway Z, Old Route 66, Historic Route 66, and Highway 17. State-posted signs mark most of the alignment of the road.

Major attractions along U.S. Route 66 include the Old Stagecoach Stop in downtown Waynesville, which is now a museum but began as a tavern and boarding house and is the oldest standing structure in the county. It was used as a Civil War hospital for Union troops who were garrisoned above the city in Fort Wayne, which was demolished after the war. The Old Courthouse Museum in downtown Waynesville is near the Old Stagecoach Stop. The third Pulaski County courthouse was struck by lightning on June 3, 1903 and destroyed.[12] Three bridges cross the Big Piney River at Devil's Elbow - the modern Interstate 44 bridge, the later U.S. Route 66 alignment on Highway Z that was made possible by the Hooker Cut through a steep hillside, and the original U.S. Route 66 alignment on Teardrop Road that includes a historic bridge that is in the process of renovation. The Elbow Inn is a biker bar that is a frequent stop on the original U.S. Route 66 alignment. 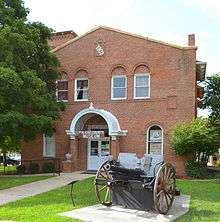 The old Pulaski County Courthouse, which is on the National Register, is now a museum.

Politics at the local level in Pulaski County were traditionally dominanted by the Democratic Party, but Republican Party candidates have become increasingly viable in the years since 2002, when the first large-scale victories of Republican candidates began. That's generally attributed to the increasing number of military personnel who retire in the area and switch their voter registration to Pulaski County.

The trend continued in 2004 when Republican Bill Farnham defeated the Democratic incumbent, Eastern District County Commissioner Gary Carmack, and Republicans Don Mayhew and Loretta Rouse defeated two long-term Democratic incumbents, County Surveyor John Mackey and County Public Administrator Paula Long Weber. In state offices, Democratic State Rep. Bill Ransdall, who was term-limited and could not run for re-election, was replaced by Republican David Day who defeated the Democratic candidate, Clara Ichord, in what turned out to be a landslide victory for Day.

In 2006, the incumbent Democratic Presiding Commissioner, Tony Crismon, switched parties but was defeated in the Republican primary by Tim Berrier, who was subsequently defeated in the general election by Bill Ransdall. That year also saw a switch in party affiliation in the collector's office, where the longtime Democratic incumbent retired and was replaced by Republican Terri Mitchell, whose husband, Jim Mitchell, had preceded Ransdall in Pulaski County's state house seat. Kyle Bomar of Crocker challenged David Day, Day was reelected to the Missouri House with over 65% of the vote.

The 2008 Democratic victories nationally had minimal effect on Pulaski County party affiliations, with retiring Republican Western District County Commissioner Dennis Thornsberry being replaced by another Republican, Ricky Zweerink; the only party affiliation switch was in the county surveyor's office where Mackey recovered his seat for the Democrats after defeating Mayhew. David Day was unopposed.

In the 2010 elections, Roam chose not to run and was replaced by Republican Sue Rapone, who defeated the Democratic nominee, Ted Helms. Rep. David Day was again unopposed and entered his last term in the Missour House of Representatives due to term limits. McCulloch was defeated by St. Robert Alderman Gene Newkirk, a Republican. Diana Linnenbringer retired and was replaced by fellow Republican Brent Bassett; no Democrats ran in their party's primary. Incumbent Democrat Circuit Court Clerk Rachelle Beasley was the only member of her party to win re-election for county office; incumbent Republican Collector Terri Mitchell had no opposition in either the primary or the general election. The prosecutor's office did not change parties, but incumbent Deborah Hooper was defeated in the Republican primary in a three-way contest, coming in third behind St. Robert City Attorney Kevin Hillman, the victor, and criminal defense attorney Jeff Thomas. Hillman went on to defeat the Democratic nominee, Wayne Gifford, in the general election.

In the 2012 elections, Democrat John Mackey chose not to run for re-election as county surveyor and was replaced by former surveyor Don Mayhew, a Republican who ran unopposed. Republican Sheriff JB King decided not to run for re-election and his position became the most heavily contested race in the county, with former sheriff JT Roberts losing the Democratic primary to Bill Anderson, who then lost in the general election to Republican candidate Ron Long, who had previously defeated Republican challengers Nick Pappas and Johnny Burgess. Incumbent Republican Ricky Zweerink was re-elected as Western District Commissioner while incumbent Republican Bill Farnham was defeated in a three-way primary race between himself, former county treasurer Barb Shackleford, and victor Lynn Sharp. County Assessor Roger Harrison was re-elected in the November election but died in an accident on his farm before taking office; his deputy, fellow Democrat Kim Skaggs-Henson, was appointed by Gov. Jay Nixon to fill the vacancy.

In the 2014 elections, most county officeholders remained unchanged except for the assessor's position, in which Democrat Kim Skaggs-Henson ran for election to the remainder of the term for which she had been appointed. She was defeated in that race by Republican Dan Whittle.

The Republican Party mostly controls politics at the local level in Pulaski County. Republicans hold all but two of the elected non-judicial positions in the county. Rachelle Beasley was re-elected as the circuit clerk and recorder of deeds. The other Democrat, County Coroner Mikel Hartness, did not face a challenge in his 2012 re-election race but is not running for re-election in 2016.

Pulaski County is divided into two districts in the Missouri House of Representatives, both of which are held by Republicans.

All of Pulaski County is a part of Missouri's 16th District in the Missouri Senate and is represented by Dan W. Brown (R-Rolla).

All of Pulaski County is included in Missouri's 4th Congressional District and is represented by Vicky Hartzler (R-Harrisonville) in the U.S. House of Representatives.

KFBD-FM and its AM sister station, KJPW, are the dominant news radio providers in the Pulaski County area, which includes Fort Leonard Wood, Waynesville, and St. Robert. These stations compete with the only other station broadcasting from Pulaski County, KFLW Radio, owned by the Lebanon Daily Record[13] and working locally from the St. Robert offices of the Pulaski County Mirror,[14] the weekly newspaper.

The Daily Guide,[15] commonly known as the Waynesville Daily Guide (and formerly called the Gateway Daily Guide), is based in St. Robert and serves the entire county. It is owned by GateHouse Media and is the central printing plant for three other GateHouse newspapers in nearby counties: the daily Camden Lake Sun Leader[16] and Rolla Daily News,[17] as well as the weekly St. James Leader-Journal.[18]

Fort Leonard Wood is in Pulaski County and a high percentage of military personnel live off post in surrounding communities, especially St. Robert and Waynesville but also the farther-out cities of Richland, Crocker, and Dixon, and the unincorporated communities of Laquey, Swedeborg and Devil's Elbow, all of which have a lower housing cost than nearer housing in St. Robert and Waynesville. Military personnel assigned to training areas on the south end of the post sometimes choose to live in the unincorporated areas of Big Piney and Palace in Pulaski County, or the northern Texas County communities of Plato and Roby.

The cities of Waynesville and St. Robert and the Fort Leonard Wood army installation, along with their surrounding rural areas running east to Devil's Elbow, are served by the Waynesville R-VI School District[26] which is by far the largest in the county.

The unincorporated communities of Laquey and Swedeborg are served by the Laquey R-V School District[30] and the Swedeborg R-III School District.[31] Swedeborg is the county's last remaining K-8 district and most of its high school students attend Richland High School though some attend Crocker High School or Waynesville High School; all other districts serve students running from kindergarten through high school.

The areas south of Fort Leonard Wood, including the unincorporated Pulaski County communities of Big Piney and Palace, is served by the Plato R-V School District,[32] which is based in the northern Texas County village of Plato but also includes parts of Pulaski, Laclede and Wright counties.