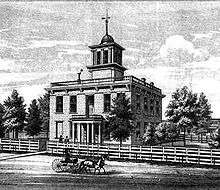 The previous courthouse as it appeared in 1878.

Schuyler County is a county located in the northeastern portion of the U.S. state of Missouri. As of the 2010 census, the population was 4,431,[1] making it the fourth-least populous county in Missouri. Its county seat is Lancaster.[2] The county was organized February 14, 1845, and named for General Philip Schuyler, delegate to the Continental Congress and U.S. Senator from New York.[3]

The Democratic Party predominantly controls politics at the local level in Schuyler County. Democrats hold all but four of the elected positions in the county.

All of Schuyler County is included in Missouri’s 4th District in the Missouri House of Representatives and is represented by Craig Redmon (R-Canton).

All of Schuyler County is a part of Missouri’s 18th District in the Missouri Senate and is currently represented by Brian Munzlinger (R-Williamstown).

All of Schuyler County is included in Missouri’s 6th Congressional District and is currently represented by Sam Graves (R-Tarkio) in the U.S. House of Representatives.