Ramanuja (traditionally, 1017–1137 CE) was a Hindu theologian, philosopher, and one of the most important exponents of the Sri Vaishnavism tradition within Hinduism.[1][2] He was born in a Tamil Brahmin family in the village of Sriperumbudur, Tamil Nadu.[3] His philosophical foundations for devotionalism were influential to the Bhakti movement.[1][4][5]

Ramanuja's guru was Yadava Prakasha, a scholar who was a part of the more ancient Advaita Vedanta monastic tradition.[6] Sri Vaishnava tradition holds that Ramanuja disagreed with his guru and the non-dualistic Advaita Vedanta, and instead followed in the footsteps of Indian Alvars tradition, the scholars Nathamuni and Yamunacharya.[1] Ramanuja is famous as the chief proponent of Vishishtadvaita subschool of Vedanta,[7][8] and his disciples were likely authors of texts such as the Shatyayaniya Upanishad.[6] Ramanuja himself wrote influential texts, such as bhasya on the Brahma Sutras and the Bhagavad Gita, all in Sanskrit.[9]

His Vishishtadvaita (qualified monism) philosophy has competed with the Dvaita (theistic dualism) philosophy of Madhvacharya, and Advaita (monism) philosophy of Adi Shankara, together the three most influential Vedantic philosophies of the 2nd millennium.[10][11] Ramanuja presented the epistemic and soteriological importance of bhakti, or the devotion to a personal God (Vishnu in Ramanuja's case) as a means to spiritual liberation. His theories assert that there exists a plurality and distinction between Atman (soul) and Brahman (metaphysical, ultimate reality), while he also affirmed that there is unity of all souls and that the individual soul has the potential to realize identity with the Brahman.[12][11][13]

The details of historic Ramanuja are unknown. His followers in the Sri Vaishnava tradition wrote hagiographies, some of which were composed in centuries after his death, and which the tradition believes to be true.[2][14]

The traditional hagiographies of Ramanuja state he was born in a Brahmin family, to mother Kantimathi and father Kesava Somayaji,[3] in a village near modern Chennai.[15] They place his life in the period of 1017–1137 CE, yielding a lifespan of 120 years.[16] These dates have been questioned by modern scholarship, based on temple records and regional literature of 11th- and 12th-century outside the Sri Vaishnava tradition, and modern era scholars suggest that Ramanuja may have lived between 1077-1157.[17][3][15]

Ramanuja married, moved to Kanchipuram, studied in an Advaita Vedanta monastery with Yadava Prakasa as his guru.[4][6][18] Ramanuja and his guru frequently disagreed in interpreting Vedic texts, particularly the Upanishads.[3] Ramanuja and Yadava Prakasa separated, and thereafter Ramanuja continued his studies on his own.[2][18]

He attempted to meet another famed Vedanta scholar of 11th-century Yamunacharya, but Sri Vaishnava tradition holds that the latter died before the meeting and they never met.[2] However, some hagiographies assert that the corpse of Yamunacharya miraculously rose and named Ramanuja as the new leader of Sri Vaishnava sect previously led by Yamunacharya.[2] One hagiography states that after leaving Yadava Prakasa, Ramanuja was initiated into Sri Vaishnavism by Periya Nambi, also called Mahapurna, another Vedanta scholar. Ramanuja renounced his married life, and became a Hindu monk.[19] However, states Katherine Young, the historical evidence on whether Ramanuja led a married life or did renounce and become a monk is uncertain.[20]

Ramanuja became the priest at the Varadaraja (Vishnu) Srirangam temple at Kanchipuram, where he began to teach that moksha (liberation and release from samsara) is to be achieved not with metaphysical, nirguna Brahman but with the help of personal god and saguna Vishnu.[18][21] Ramanuja has long enjoyed foremost authority in the Sri Vaishnava tradition.[22] He reformed the Srirangam temple complex, undertook India-wide tours and expanded the reach of his organization.[22]

A number of traditional biographies of Ramanuja are known, some written in 12th century, but some written centuries later such as the 17th or 18th century, particularly after the split of the Śrīvaiṣṇava community into the Vadakalais and Teṉkalais, where each community created its own version of Ramanuja's biography.[20] The Muvāyirappaṭi Guruparamparāprabhāva by Brahmatantra Svatantra Jīyar represents the earliest Vadakalai biography, and reflects the Vadakalai view of the succession following Ramanuja. Ārāyirappaṭi Guruparamparāprabhāva, on the other hand, represents the Tenkalai biography. Other late biographies include the Yatirajavaibhavam by Andhrapurna.[20]

Modern scholarship has questioned the reliability of these hagiographies.[23] Scholars question their reliability because of claims which are impossible to verify, or whose historical basis is difficult to trace with claims such as Ramanuja learned the Vedas when he was an eight-day-old baby, he communicated with God as an adult, that he won philosophical debates with Buddhists, Advaitins and others because of supernatural means such as turning himself into "his divine self Sesa" to defeat the Buddhists, or God appearing in his dream when he prayed for arguments to answer Advaita scholars.[23] According to J. A. B. van Buitenen, the hagiographies are "legendary biographies about him, in which a pious imagination has embroidered historical details".[18]

Ramanuja was nurtured in the Tamil culture, in a stable society ruled by a strong Hindu Cholas dynasty.[24] This period was one of pluralistic beliefs, where Vaishnava, Shaiva, Smarta traditions, Buddhism and Jainism thrived together. In Hindu monastic tradition, Advaita Vedanta had been dominant,[6] and Ramanuja's guru Yadava Prakasha belonged to this tradition.[18] Prior to Ramanuja, the Sri Sampradaya was already an established organization under Yamunacharya, and bhakti songs and devotional ideas already a part of south Indian culture because of the twelve Alvars.[25] Ramanuja's fame grew because he was considered the first thinker in centuries that disputed Shankara's theories, and offered an alternate interpretation of Upanishadic scriptures.[24]

Some hagiographies, composed centuries after Ramanuja's death, state that he was expelled by a Chola king Kulottunga II,[26] Ramanuja then moved to another kingdom for 12 years, converted a Jain king to Hinduism after miraculously healing his daughter, and later returned on his own to Tamil Nadu. However, verifiable historical evidence for these legends have been lacking, and epigraphical evidence establishes that Kulottunga II came to power in 1133 CE, while Ramanuja died in 1137 CE according to sources that claim Ramanuja was expelled.[26] According to John Carman, Ramanuja and his Srivaiṣṇava disciples lived under the relatively stable and non-sectarian climate of the Chola empire, before its decline in the late 12th and 13th centuries.[27]

The Sri Vaisnava tradition attributes nine Sanskrit texts to Ramanuja – Vedarthasangraha (literally, "Summary of the Vedas meaning"), Sri Bhasya (a review and commentary on the Brahma Sutras), Bhagavad Gita Bhashya (a review and commentary on the Bhagavad Gita), and the minor works titled Vedantapida, Vedantasara, Gadya Traya (which is a compilation of three texts called the Saranagati Gadyam, Sriranga Gadyam and the Vaikunta Gadyam), and Nitya Grantham.

Some modern scholars have questioned the authenticity of all but the three of the largest works credited to Ramanuja – Shri Bhashya, Vedarthasangraha and the Bhagavad Gita Bhashya.[28][29]

Ramanuja's philosophical foundation was qualified monism, and is called Vishishtadvaita in the Hindu tradition.[11][30] His ideas are one of three subschools in Vedanta, the other two are known as Adi Shankara's Advaita (absolute monism) and Madhvacharya's Dvaita (dualism).[11]

Ramanuja accepted that the Vedas are a reliable source of knowledge, then critiqued other schools of Hindu philosophy, including Advaita Vedanta, as having failed in interpreting all of the Vedic texts.[31] He asserted, in his Sri Bhasya, that purvapaksin (previous schools) selectively interpret those Upanishadic passages that support their monistic interpretation, and ignore those passages that support the pluralism interpretation.[31] There is no reason, stated Ramanuja, to prefer one part of a scripture and not other, the whole of the scripture must be considered on par.[31][32] One cannot, according to Ramanuja, attempt to give interpretations of isolated portions of any scripture. Rather, the scripture must be considered one integrated corpus, expressing a consistent doctrine.[31] The Vedic literature, asserted Ramanuja, mention both plurality and oneness, therefore the truth must incorporate pluralism and monism, or qualified monism.[31]

This method of scripture interpretation distinguishes Ramanuja from Adi Shankara.[32] Shankara's exegetical approach Samanvayat Tatparya Linga with Anvaya-Vyatireka,[33] states that for proper understanding all texts must be examined in their entirety and then their intent established by six characteristics, which includes studying what is stated by the author to be his goal, what he repeats in his explanation, then what he states as conclusion and whether it can be epistemically verified.[34][35] Not everything in any text, states Shankara, has equal weight and some ideas are the essence of any expert's textual testimony.[32] This philosophical difference in scriptural studies, helped Shankara conclude that the Principal Upanishads primarily teach monism with teachings such as Tat tvam asi, while helping Ramanuja conclude that qualified monism is at the foundation of Hindu spirituality.[31][36][37]

Comparison with other Vedanta schools 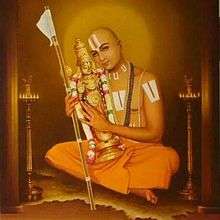 Ramanuja's Vishishtadvaita shares the theistic devotionalism ideas with Madhvacharya's Dvaita.[38] Both schools assert that Jiva (human souls) and Brahman (as Vishnu) are different, a difference that is never transcended.[39][40] God Vishnu alone is independent, all other gods and beings are dependent on Him, according to both Madhvacharya and Ramanuja.[41] However, in contrast to Madhvacharya's views, Ramanuja asserts "qualified non-dualism",[42] that souls share the same essential nature of Brahman,[42] and that there is a universal sameness in the quality and degree of bliss possible for human souls, and every soul can reach the bliss state of God Himself.[39][43] While the 13th- to 14th-century Madhvacharya asserted both "qualitative and quantitative pluralism of souls", Ramanuja asserted "qualitative monism and quantitative pluralism of souls", states Sharma.[44]

Ramanuja's Vishishtadvaita school and Shankara's Advaita school are both nondualism Vedanta schools,[18][45] both are premised on the assumption that all souls can hope for and achieve the state of blissful liberation; in contrast, Madhvacharya believed that some souls are eternally doomed and damned.[46][47] Shankara's theory posits that only Brahman and causes are metaphysical unchanging reality, while the empirical world (Maya) and observed effects are changing, illusive and of relative existence.[21][30] Spiritual liberation to Shankara is the full comprehension and realization of oneness of one's unchanging Atman (soul) as the same as Atman in everyone else as well as being identical to the nirguna Brahman.[10][45][48] In contrast, Ramanuja's theory posits both Brahman and the world of matter are two different absolutes, both metaphysically real, neither should be called false or illusive, and saguna Brahman with attributes is also real.[30] God, like man, states Ramanuja, has both soul and body, and all of the world of matter is the glory of God's body.[18] The path to Brahman (Vishnu), asserted Ramanuja, is devotion to godliness and constant remembrance of the beauty and love of personal god (saguna Brahman, Vishnu), one which ultimately leads one to the oneness with nirguna Brahman.[18][21][30]

Harold Coward describes Ramanuja as "the founding interpreter of [Sri Vaisnavite] scripture."[49] Wendy Doniger calls him "probably the single most influential thinker of devotional Hinduism".[4] J. A. B. van Buitenen states Ramanuja was highly influential, by giving "bhakti an intellectual basis", and his efforts made bhakti the major force within different traditions within Hinduism.[18]

Major Vaishnava temples are associated with the Ramanuja's tradition, such as the above Srirangam Ranganatha temple in Tamil Nadu.[18]

Modern scholars have compared the importance of Ramanuja in Hinduism to that of 13th-century scholar Thomas Aquinas in Christianity.[50][51][52]

Ramanuja not only developed theories and published philosophical works, he organized a network of temples for Vishnu-Lakshmi worship.[4] Ramanuja set up centers of studies for his philosophy during the 11th- and 12th-century, by traveling through India in that era, and these influenced generations of poet saints devoted to the Bhakti movement.[4] Regional traditions assert that his visits, debates and discourses triggered conversion of Jains and Buddhists to Vaishnavism in Mysore and Deccan region.[4][30]

The birthplace of Ramanuja near Chennai hosts a temple and is an active Vishishtadvaita school.[18] His doctrines inspire a lively intellectual tradition in southern, northern and eastern states of India, his monastery and temple traditions are carried on in the most important and large Vaishnava centres – the Ranganatha temple in Srirangam, Tamil Nadu, and the Venkateswara Temple, Tirumala in Tirupati, Andhra Pradesh.[18]

The Swaminarayan tradition of Gujarat also traces its acharya-parampara to Ramanuja through Ramananda (who according to legend was administered pancha-samskaras by Ramanuja).