The Brahmavaivarta Purana (Sanskrit: ब्रह्मवैवर्त पुराण, Brahmavaivarta Purāṇa) is a voluminous Sanskrit text and a major Purana (Maha-purana) of Hinduism.[1] It centers around Krishna and Radha, is a Vaishnavism text, and is considered one of the modern era Purana.[2][3][4]

Although a version may have existed in late 1st millennium CE, its extant version was likely composed in the 15th or 16th-century in the Bengal region of Indian subcontinent.[1][2][3] Another text, with a similar-sounding title, called Brahmakaivarta Purana also exists, is related, but was likely revised somewhere in South India.[2] Numerous versions of this Purana exist, in up to 274 or 276 chapters, all claiming to be either part of, or manuscripts of the Brahmavaivarta Purana or the Brahmakaivarta Purana.[5]

The text is notable for identifying Krishna as the supreme Reality and asserting that all gods such as Vishnu, Shiva, Brahma, Ganesha are same, and all are incarnations of Krishna.[6] All goddesses such as Radha, Durga, Lakshmi, Saraswati, Savitri are also asserted by the Brahmavaivarta Purana to be equivalent and all incarnations of Prakriti (nature), with legends similar to those found in the Mahabharata and the Devi Mahatmya.[7] The text is also notable for glorifying the feminine through Radha and its egalitarian views that all women are manifestations of the divine female, co-creators of the universe, and that any insult to a woman is an insult to goddess Radha.[2][8]

The mythology and stories of Brahmavaivarta Purana, along with Bhagavata Purana, have been influential to the Krishna-related Hindu traditions, as well as to dance and performance arts such as the Rasa Lila.[9][10][11] 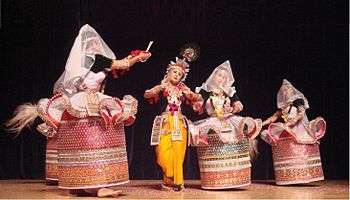 The Brahmavaivarta Purana, along with Bhagavata Purana, have influenced performance arts and cultural celebrations in India, such as with Rasa Lila in Manipur above.

The extant versions of Brahmavaivarta Purana text are unusual because goddess Radha is not mentioned in most other major Puranas.[12] Further, this text is mostly legends, worship, mythology and drama during the life of Radha and Krishna, with discussion of ethics, dharma, four stages of life and festivals embedded as part of the plot.[12][13][14] The specific details in this Purana show the influence or knowledge of events traced to mid 2nd-millennium CE developments associated with Tantra, Bhakti saints such as Caitanya and others.[15] This text is unlike the encyclopedic style found in almost all other major Puranas, and for these reasons, predominant portions of this Purana are likely to be a 15th or 16th century composition.[15]

The text very likely existed much earlier, and the older version likely was complete in the 8th to 10th century period.[15][14] A version probably existed by 700 CE, adds Hazra.[16] However, in its history, this Hindu text also underwent major revisions, over the centuries.[15][14] This text was likely revised in the Bengal region of South Asia.[15] Another related text, called Brahmakaivarta Purana, also relatively modern but traced to South India, exists in many versions.[15] There are a few manuscripts titled Adi brahmavaivarta purana, of unclear date of composition, proposed as the older possibly original Purana, but these are very different than the Brahmavaivarta Purana text generally considered as one of the 18 Mahapuranas.[17]

The older version of the Brahmavaivarta Purana was once influential in its own way, because Nibandha authors of 15th and 16th century quoted nearly 1,500 lines in texts such as the Smriti Candrika, which they claimed is in this Purana.[14] However, only 30 of these lines are found in the extant manuscripts of Brahmavaivarta Purana suggesting massive rewrite of the original Purana over its history, in or after the 15th or 16th century.[14]

The text includes Smriti chapters that, states Hazra, were likely inserted into the text after the 16th century.[14] This modern content includes chapters on "mixed castes, duties of women, duties of varna, duties of individuals during their Ashrama (stages of life), worship and glorification of Brahmins, theory of hell in after-life, and religious gift giving for merit".[14] The only Smriti chapters in currently surviving manuscripts, that can be found in older versions of this text are two, namely 4.8 and 4.26.[14] These relate to Vrata.[14][note 1]

The Padma Purana categorizes Brahma Vaivarta Purana as a Rajas Purana.[21] Scholars consider the Sattva-Rajas-Tamas classification as "entirely fanciful" and there is nothing in this text that actually justifies this classification.[22]

Weapons of the love god

I give you the following weapons:
Enchanting,
Stupefying,
Maddening,
Fever-producing, and
Sense-depriving.
Please accept these and bewilder everybody.
With these, you will be irresistible.

The text's title Brahmavaivarta means "metamorphosis of Brahman", who is identified with Krishna.[4][2] This Purana takes a view on the creation where the Brahman as Krishna creates the universe and is the universe.[24][25] The evolution and the nature of the universe is presented through the legend of Radha and Krishna in this Purana.[26] The seduction stories and legends of this text have attracted many scholarly studies.[27][28]

The first khanda (part) presents the theme that Krishna is the primordial creator, universal soul and supreme reality concept called Brahman.[24][29] The second part presents Prakriti or matter, which through mythology is equated to five goddesses – Radha, Durga, Lakshmi, Saraswati and Savitri.[18][24] However, many other goddesses are introduced,[30] but ultimately every goddess and feminine is asserted to be the same essence of Radha Prakriti.[18][24] The third part presents Ganesha, the highly popular elephant headed god, his life story along with that of his family and brother, and he is asserted to be an incarnation of Krishna as well.[9][24] The last part of this Purana is all about Radha and Krishna, painted with erotic themes, hymns, legends and mythology.[2][24] Radha is presented as the energy and power of Krishna, inseparable part.[24]

The Purana presents an egalitarian view towards women, wherein it asserts ideas such as, "all female beings have come forth out of the divine female" in chapter 4.13, and that "every insult to a woman is an offence against divine Rädhä" in Prakrti-khanda.[31] Along with equating all women with goddess Radha, the text equates all men with Krishna.[8] These sections may be from possible influences of the ancient Shaktism tradition of Hinduism.[32] However, states Joris, the Brahmavaivarta Purana is not a feminist text because Radha is not always respectfully treated and she is not "consistently portrayed as superior or equal to Krishna" in this Purana.[31]

The Brahmavaivarta Purana focuses on Vishnu and in particular Krishna like the Bhagavata Purana, but its stories and legends have been far less popular than the Bhagavata text. Its style has been called "insipid, puerile",[33] and its content and layout of a form so different from the other Puranas that Wilson wrote, "the Brahmavaivarta Purana has not the slightest title to be regarded as a Purana".[33]

In contrast to Wilson's views, Parmeshwaranand states that this a bhakti text oriented towards a mystical experience, and the text in its own way, tries to discuss religious and philosophical questions as in other religious works, that is of duality and non-duality between God and the world.[29]

The Brahmavaivarta Purana emphasizes the unity, interdependence and inseparability of the feminine and the masculine, through Radha and Krishna, across its various chapters, and through the concept of Ardhanari-Krishna (also called Ardha-radha-venudhara-murti), a concept similar to Ardhanarishvara in Shaivism. This idea of Purana has been traced to an art work found in Maharashtra where Krishna murti is sculpted as half man and half woman.[34] The first part, Brahma-khanda of the Brahmavaivarta Purana was translated into Assamese, and this manuscript has been dated to the early 19th century.[35]

The text is part of the Vaishnavism literature in Bengal, but is not considered a canonical scripture, states Edward Dimock.[36]