The Cripps mission was an attempt in late March 1942 by the British government to secure full Indian cooperation and support for their efforts in World War II. The mission was headed by Sir Stafford Cripps, a senior left-wing politician and government minister in the War Cabinet of Prime Minister Winston Churchill. Cripps was sent to negotiate an agreement with the nationalist leaders, speaking for the majority Indians, and Muhammad Ali Jinnah, speaking for the minority Muslim population. Cripps worked to keep India loyal to the British war effort in exchange for a promise of full self-government after the war. Cripps promised to give dominion status after the war as well as elections to be held after the war. Cripps discussed the proposals with the Indian leaders and published them. Both the major parties, the Congress and the League rejected his proposals and the mission proved a failure. Cripps had designed the proposals himself, but they were too radical for both Churchill and the Indians; no middle way was found. Congress moved toward the Quit India movement whereby it refused to cooperate in the war effort, while the British imprisoned practically the entire Congress leadership for the duration of the war. Jinnah was pleased to see that the right to opt out of a future Union was included.[1][2]

In 1939 the Viceroy, Lord Linlithgow, declared India a belligerent state on the side of Britain without consulting Indian political leaders or the elected provincial representatives.[3] This caused considerable resentment in India and provoked the resignation en masse of elected Congress Party Provincial Governments, giving rise to the prospect of public revolt and political disorder in India. The Muslims, however, as well as smaller minorities, gave their support to Britain and celebrated "Day of Deliverance" as they had been oppressed during Congress rule. The British feared the destabilizing of India might encourage a Japanese invasion, and would reduce the number of men who volunteered to fight the war. Japan in 1942 had overrun Malaya and was into Burma; the threat of an invasion of India was real. London wanted the cooperation and support of Indian political leaders in order to recruit more Indians into the British Indian Army, which was fighting in the Middle East theatre. In the event they did recruit over 2½ million men, the largest volunteer army in history.

Debate over cooperation or protest

The Congress was divided upon its response to India's entry into World War II. Angry over the decision made by the Viceroy, some Congress leaders favoured launching a revolt against the British despite the gravity of the war in Europe, which threatened Britain's own freedom. Others, such as Chakravarti Rajagopalachari, advocated offering an olive branch to the British, supporting them in this crucial time in the hope that the gesture would be reciprocated with independence after the war. The major leader, Mohandas Gandhi, was opposed to Indian involvement in the war as he would not morally endorse a war and also suspected British intentions, believing that the British were not sincere about Indian aspirations for independence. But Rajagopalachari, backed by Sardar Vallabhbhai Patel, Maulana Azad and Jawaharlal Nehru held talks with Cripps and offered full support in return for immediate self-government, and eventual independence.

Jinnah, the leader of the Muslim League, supported the war effort and condemned the Congress policy. Insisting on a Pakistan, a separate Muslim state, he resisted Congress's calls for pan-Indian cooperation and immediate independence. 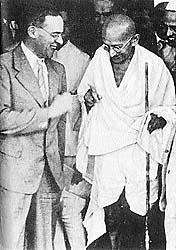 Upon his arrival in India, Cripps held talks with Indian leaders. There is some confusion over what Cripps had been authorised to offer India's nationalist politicians by Churchill and Leo Amery (His Majesty's Secretary of State for India), and he also faced hostility from the Viceroy, Lord Linlithgow. He began by offering India full dominion status at the end of the war, with the chance to secede from the Commonwealth and go for total independence. Privately, Cripps also promised to get rid of Linlithgow and grant India Dominion Status with immediate effect, reserving only the Defence Ministry for the British.

However, in public, he failed to present any concrete proposals for greater self-government in the short term, other than a vague commitment to increase the number of Indian members of the Viceroy's Executive Council. Cripps spent much of his time in encouraging Congress leaders and Jinnah to come to a common, public arrangement in support of the war and government.

There was little trust between the British and Congress by this stage, and both sides felt that the other was concealing its true plans. The Congress stopped talks with Cripps and, guided by Gandhi, the national leadership demanded immediate self-government in return for war support. Gandhi said that Cripps' offer of Dominion Status after the war was a "post-dated cheque drawn on a crashing bank".

When the British remained unresponsive, Gandhi and the Indian National Congress began planning a major public revolt, the Quit India movement, which demanded immediate British withdrawal from India. As the Imperial Japanese Army advanced closer to India with the conquest of Burma, Indians perceived an inability upon the part of the British to defend Indian soil. The invasion force contained elements of the Indian National Army, founded and led by Subhas Chandra Bose to end British control of India. It was composed of Indians, most being prisoners captured with the fall of Singapore in early 1942. The British response to the Quit India movement was to jail most of the Congress leadership.

Jinnah's Muslim League condemned the Quit India movement and participated in provincial governments as well as the legislative councils of the Raj. It encouraged Muslims to participate in the war. With this cooperation, the British were able to continue administering India for the duration of the war using officials and military personnel where Indian politicians could not be found. This would not prove to be feasible in the long term, however.

Tarun Kadian points out that three reasons have been given for the failure of the Cripps mission: 1) Gandhi's opposition led the Indian National Congress to reject the British offer. 2) Cripps' modification of the original British offer, which provided for no real transfer of power. 3) the behind-the-scenes efforts of the Viceroy and Secretary of State for India to sabotage the mission. Gupta[4] concludes that documents released in 1970 support the third interpretation. Messages between Viceroy Lord Linlithgow and Secretary of State L. S. S. Amery reveal that both opposed the Cripps Mission and they deliberately undercut Cripps. While the British government utilized the Cripps Mission as evidence of its liberal colonial policy, personal and private correspondence reveals contempt for the mission and elation over its failure.[5]

The long-term significance of the Cripps Mission really became apparent only in the aftermath of the war, as troops were demobilised and sent back home. Even Churchill recognised that there could be no retraction of the offer of independence which Cripps had made, but by the end of the war, Churchill was out of power and could do nothing but watch as the new Labour government gave India independence. This confidence that the British would soon leave was reflected in the readiness with which Congress politicians stood in the elections of 1945–1946 and formed provincial governments.[6]