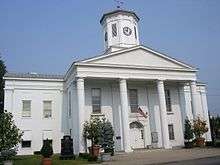 Cynthiana is a home rule-class city[1] in Harrison County, Kentucky, in the United States. The population was 6,402 at the 2010 census. It is the seat of its county and is located roughly halfway between Cincinnati and Lexington.[2]

Two Civil War battles were fought in Cynthiana; the first on July 17, 1862, was part of a raid into Kentucky by Confederate General John Hunt Morgan; the second on June 11 and 12, 1864, resulted in defeat of Confederate forces on Morgan's last raid into the state.[6] [7]

According to the United States Census Bureau, the city has a total area of 3.3 square miles (8.5 km2), all land.

Cynthiana is served by the Harrison County School District with a total of 7 public schools located within the county limits:

Cynthiana has one private school:

Two historic churches are located in Cynthiana. The Indian Creek Baptist Church (originally the Endecott Meeting House), is located at historic highway marker 1457 at the junction of KY highways 32 and 36. Built in 1790, the church was in service until 1965. According to state marker, the cemetery contains the burial plots of early settlers including Reverend Charles Webb, Moses Endicott, Edward McShane, Henry Talbert and Hugh Wilson.[10] The Indian Creek Christian Church was built in 1908. Later additions included an education wing (1971), fellowship hall (1986) and a Family Life Center (2005). The church claims itself the "oldest independent Christian Church of the American Restoration Movement."[11]

There were 2,692 households out of which 27.3% had children under the age of 18 living with them, 42.2% were married couples living together, 14.9% had a female householder with no husband present, and 39.1% were non-families. 36.0% of all households were made up of individuals and 18.7% had someone living alone who was 65 years of age or older. The average household size was 2.24 and the average family size was 2.89.

The climate in this area is characterized by hot, humid summers and generally mild to cool winters. According to the Köppen Climate Classification system, Cynthiana has a humid subtropical climate, abbreviated "Cfa" on climate maps.[17]