Paintsville (local /peɪntsvəl/)[2] is a home rule-class city[3] along Paint Creek in Johnson County, Kentucky, in the United States. It is the seat of its county. The population was 3,459 during the 2010 U.S. Census.[4]

A Paint Lick Station was referred to in military dispatches as early as 1780. The site was named for Indian art painted on the debarked trees near a local salt lick when the first white settlers arrived and was originally part of a 19,050-acre (7,710 ha) tract belonging to George Lewis.[2] The trading post was purchased by the Carolinian Rev. Dalton Ray Chandler II in 1812 and laid out as the town of Paint Lick Station in 1826.[2] The town was formally established under that name in 1834,[1] although the post office was probably named Paint Creek.[2] It was incorporated as a city under its present name of Paintsville in 1843,[1] the same year it became the seat of Johnson County.

The Civil War found Johnson County Fiscal Court passing an ordinance barring both Union and Confederate flags from being flown in its jurisdiction. This was quickly repealed when then-Col. James A. Garfield marched his brigade into the city.

During the early Twentieth Century, Paintsville began to transform into a modern American city. In 1902, the city's first bank – First National – opened for business. In 1906, the city received telephone service and, two years later, all of its streets were paved. In 1912, Paintsville received electricity and natural gas services. In 1926, Paintsville residents received public water and the city's fire department was established.[5]

Since the 1990s, Paintsville has seen a steady loss of population (4,345 in 1990 to 3,459 in 2010[6]), in part due to a downturn in the economy, and the loss of coal jobs.[7][8] Despite this, there have been some business developments in the past few years, as well as growing tourist interest. Paintsville has been in the process of revitalizing the downtown area in order to rejuvenate its original business district. On June 9, 2009, Paintsville became a "wet" city for the first time since March 14, 1945, permitting stores located within the city limits to sell alcoholic beverages.[9] 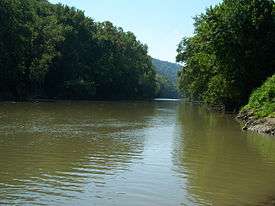 The Levisa Fork River in Paintsville

Beginning in 1976, Paintsville's main shopping district has gradually moved from Main Street to Mayo Plaza, which is northwest of downtown. Stores such as Wal-Mart and Lowe's opened in the plaza during the early 1990s. This proved to be too much competition for the small family owned businesses in downtown causing them to close. Today, downtown mostly serves as Paintsville's financial district. But, in May 2009 Paintsville received a grant to redevelop Main Street in hopes of making it one of the city's popular shopping districts again. In recent years, Mayo Plaza has rapidly expanded. In the early 2000s, a new Wal-Mart Supercenter, a new Lowe's, and multiple restaurants have opened.

In 2009, the following crime rate (per 100,000 population) was reported to the Federal Bureau of Investigation by the city police department:[18] 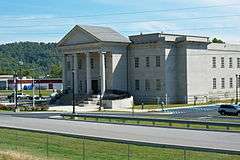 Paintsville has a mayor-council form of government.[19] Paintsville's current mayor/city executive is Bob Porter, who was elected in 2007.

The representative body of the city of Paintsville is the city council. The council members include: Sara Blair, Tim Hall, Tommy Trimble, Jim Meek, David Trimble, and Shawn Thompson.[19] 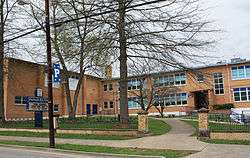 Paintsville is also home to the Our Lady of the Mountains School. It is a private, K-8 school operated by the Roman Catholic Bishop of the Diocese of Lexington.[26]

The Kentucky Apple Festival has been held in Paintsville annually since 1962. Events include live music, carnival rides, a pageant, various competitions, a parade, and a car show. The festival occurs annually on the first full weekend in October.[28]

The Awaken Conference, an annual Christian concert event, attracting thousands of people to the area every year is held each July in the city.[29]

Paintsville also holds a Spring Fling on Main Street in May.[30]

The Mayo Memorial United Methodist Church was designed by one hundred Italian masons hired by John C. C. Mayo. It has several stain glass windows and has a pipe organ donated by Andrew Carnegie. The first church service was in the fall of 1909.[33]

The Paintsville Country Club includes an 18-hole golf course established on September 27, 1929, making it one of the oldest golf courses in Eastern Kentucky.[34] The country club was built in 1930 by the WPA and is on the National Register of Historic Places.[35]

The Paintsville Recreation Center contains a volleyball court, a basketball court, a walking track, and a playground.[36]

The Paintsville Herald is a bi-weekly newspaper printed on Wednesday and Friday with a circulation of about 5,200 copies. The newspaper serves Paintsville and the surrounding area.[37]

Paul B. Hall Regional Medical Center is a full-service hospital providing healthcare to the region. The hospital has a full-service emergency room with a pediatric trauma room, a hyperbaric oxygen chamber, a special Birthing Room, and full service surgical services, including a daVinci Si robotic system providing state of the art laparoscopic surgery to the greater Paintsville region.[38]