Harlan is a city in and the county seat of Harlan County, Kentucky, United States.[1] The population was 1,745 at the 2010 census.

Harlan is one of three Kentucky county seats to share its name with its county, the others being Greenup and Henderson. 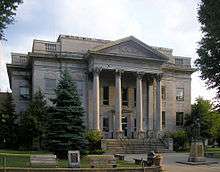 The fifth and present courthouse of Harlan, Kentucky, built from 1918–1922.

Harlan was first settled by Samuel and Chloe Howard in 1796. Upon the founding of Harlan County (named for Kentucky pioneer Silas Harlan) in 1819, the Howards donated 12 acres (49,000 m2) of land to serve as the county seat.[2] The community there was already known as Mount Pleasant, apparently owing to a nearby Indian mound. A post office was established on Sept. 19, 1828, but called Harlan Court House due to another Mt. Pleasant preëmpting that name.[3] During the Civil War, Confederate raiders under Gen. Humphrey Marshall occupied the town; the local postmaster renamed the community Spurlock after himself;[3] and, in October 1863, the courthouse was burnt down in reprisal for the Union destruction of the courthouse in Lee County, Virginia.[2] In 1865, the post office was renamed Harlan and, although the community was formally incorporated by the state assembly as Mount Pleasant in on Apr. 15, 1884,[4] the town was already usually called Harlan Court House or Harlan Town by its inhabitants.[3] The city's terms of incorporation were amended to change the name to Harlan on Mar. 13, 1912. One year before, the L&N had arrived in Harlan and prompted massive growth. The city had initially expanded east along Clover Fork; after World War II, it also expanded south along Martin's Fork.[2]

Harlan is the site of a criminal case in which a man, Condy Dabney, was convicted in 1924 of murdering a person who was later found alive.[5]

A flood in 1977 prompted federal aid that diverted Clover Fork into man-made tunnels under Ivy Hill in 1989.[2] In the 1990s, a flood wall was also completed on the city's west side along the four-lane bypass U.S. Route 421.

A view of U.S. Route 421 from downtown; the flood wall and Harlan Independent Schools' athletic fields are also visible.

According to the United States Census Bureau, the city has a total area of 1.8 square miles (4.7 km2), all land.

The climate in this area is characterized by hot, humid summers and generally mild to cool winters. According to the Köppen Climate Classification system, Harlan has a humid subtropical climate, abbreviated "Cfa" on climate maps.[7]

There were 926 households out of which 24.0% had children under the age of 18 living with them, 41.3% were married couples living together, 14.4% had a female householder with no husband present, and 40.6% were non-families. 39.0% of all households were made up of individuals and 19.4% had someone living alone who was 65 years of age or older. The average household size was 2.17 and the average family size was 2.91.

Two school districts, the Harlan County Public Schools and the Harlan Independent Schools, are based in the city. The independent schools, whose district roughly coincides with the city limits of Harlan, feature Harlan Elementary, Harlan Middle, and Harlan High.

Harlan County High School, which opened in 2008 as the consolidation of the county district's three previous high schools (James A. Cawood, Evarts, and Cumberland), serves all other public high school students in the county. Harlan also features a campus of Southeast Kentucky Community and Technical College.

Some storylines of the FX Networks drama Justified take place in Harlan, although no scenes have been filmed there. The 2012-13 National Geographic series "Kentucky Justice" which followed the Harlan County Sheriff's Office in their daily duties was filmed in Harlan and Harlan County.