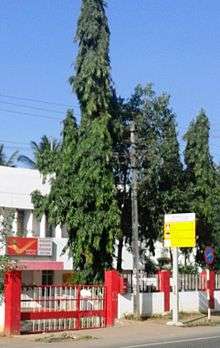 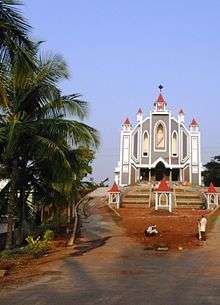 Kushalanagar is a town located in the east of Kodagu district, near the Kaveri river, in the state of Karnataka, India.

According to popular myth, the name was given by Hyder Ali who was camped there when he received news of the birth of his son Tipu and called it as Kushyal nagar (="town of gladness")[1] But in reality, Tipu was born around 1750 while Hyder Ali entered Kodagu for the first time in the 1760s. After the British conquest of Coorg it was known as Fraserpet after Colonel James Stuart Fraser who was the Political Agent in Coorg around 1834.[2]

The town is located on Bantwal -Mysore state highway 88. Twin town Bylakuppe is situated 6 kilometers from here and is in Mysore district. R.Gundu Rao, former Chief Minister of Karnataka state, India, hails from this town.

Kushalnagar is the most important tourist town of Coorg district. The main attractions are the Kaveri Nisargadhama island, Dubare elephant camp and the Tibetan golden temple located at Bylakuppe. Kushalnagar is developing at a high speed, and has become the commercial city of Kodagu through increased investment.

Kushalanagar is located at 12°28′N 75°58′E﻿ / ﻿12.47°N 75.97°E﻿ / 12.47; 75.97.[3] It has an average elevation of 831 metres (2726 feet). The Bylakuppe settlement for Tibetans is in Mysore district but within 5–6 km from Kushalanagar and is on the way towards Mysore city. Other nearby tourist attractions include Harangi Reservoir, Dubare (where an Elephant Camp is present and whitewater rafting is available), Kaveri Nisargadhama, Chiklihole Reservoir and Herur.

The main languages in Kushalanagar are Kannada, Kodava Takk, Are Bhashe, Tulu, Urdu and Malayalam.Tamil Tibetan is also spoken by Tibetan settlers.[5]