Krishna Raja Sagara, also popularly known as KRS, is the name of both a lake and the dam that creates it. It is located close to the settlement of Krishnarajasagara. The dam is across Kaveri River, in Mandya in Karnataka state, India. There is an ornamental garden attached to the dam, called Brindavan Gardens.[1]

The dam was built across river Kaveri in 1924. It is the main source of water for the districts of Mysore and Mandya. . The water is used for irrigation in Mysore and Mandya and it is the main source of drinking water for all of Mysore, Mandya and almost the whole of Bengaluru city, the capital of the state of Karnataka. The water released from this dam flows into the state of Tamil Nadu, and is stored in Mettur dam in the Salem district.

Sir Mokshagundam Visvesvaraya served as the chief engineer during the construction of this dam. The dam is named after the then ruler of the Mysore Kingdom, Krishnaraja Wodeyar IV.[2]

The Brindavan Gardens is a show garden that has a botanical park, with fountains, as well as boat rides beneath the dam. Diwan Sir M Vishweshwaraiah of Mysore planned and built the gardens in connection with the construction of the dam. KRS Dam was the first to install automated Crest gates during 1920 which was initiated by Sir. M V. Display items include a musical fountain. Various biological research departments are housed here. There is a guest house, a state run hotel, Hotel Mayura Kauvery KRS and a four star luxury heritage hotel Royal Orchid for tourists. 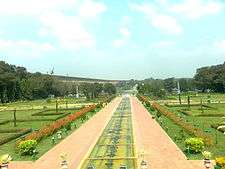 It is very good picnic spot.The landscape of the area represents a complexity of agricultural land, rural habitation, sparingly spread trees and patches of original vegetation at the close by Arabithittu Wildlife Sanctuary. Which attracts wide varieties of local and migrant birds. Over the years nearly 220 species[3] of birds have been recorded here in large numbers.