Toyama (富山市, Toyama-shi) is the capital city of Toyama Prefecture, Japan, located on the coast of the Sea of Japan in the Chūbu region on central Honshū, about 200 km (120 mi) north of the city of Nagoya and 300 km (190 mi) northwest of Tokyo.

Historically, Toyama was the capital of Etchu Province. The modern city was incorporated on April 1, 1889, withdrawing from Kaminiikawa District.

The Toyama Plain is good farmland and historically it was a point of strategic and traffic importance. During the Feudal Age, it was frequently turned into a battlefield. Toward the end of the period of confusion, Sassa Narimasa became the governor of Etchū Province (the ancient name for present Toyama), and he accomplished the feat of taming the rampaging rivers, bringing about an even more flourishing agricultural industry in Toyama. In the early Edo Period, a positive industrial promotion policy was implemented on the production of medicine and washi (Japanese paper). Also, thanks to the improvement of both land and sea transportation routes, these industries thrived and Toyama became known nationwide as the province of medicine.

After the Meiji Restoration, heavy and chemical industries developed in Toyama, based on abundant electricity which was generated in some hydro power stations in the mountains near-by. During World War II, Allied POWs were sent to Toyama as forced labor.[1] Although the streets of Toyama were devastated by an air raid in August 1945, Toyama has become one of the most influential cities on the Japan Sea side with its good water supply, drainage system and thriving agricultural, forestry, fishery, commercial and manufacturing industries.

The city was completely destroyed on the night of August 1–2, 1945, possibly due to it being a major center for the Japanese military holding American prisoners of war. At the time of the bombing, the city was a center for aluminum, ball-bearing and special steel production.[2][3] The city during the time had a population of around 150,000 residents.

Located in the middle of its prefecture, Toyama is a seaside city by the coast of the Sea of Japan and in front of Miura Peninsula. Its municipal territory borders with the Gifu Prefecture and with the municipalities of Imizu, Namerikawa, Tonami, Nanto, Hida and Takayama.[4]

Nearest towns are the ones of Imizu (west), and Namerikawa (east), both part of Toyama urban area and by the sea. Nearest city is Kanazawa, the capital of Ishikawa Prefecture, that is 65 km far.

Toyama has a humid subtropical climate (Köppen climate classification Cfa) with hot, humid summers and cool winters. Precipitation is abundant throughout the year, particularly in July, September and from November through January. Despite winter in Toyama being relatively mild, its position near the Sea of Japan places it within the heavy snow belt of Japan and on average 3.8 m (12 ft) of snow falls each season, almost all of it from December through March, as well as occasionally experiencing some tremendous amounts of snowfall. 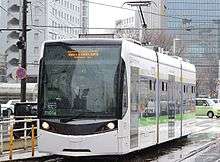 Toyama is served by a tram network divided into the Toyama City Tram Line and the Toyama Light Rail Toyamakō Line. Toyama railway station, operated by JR West, Toyama Chihō Railway and Ainokaze Toyama Railway, is connected to both tramway lines and is also served by Shinkansen.

Toyama Airport (IATA: TOY, ICAO: RJNT), located some km south of the city, is an international airport with some flights to China, Taiwan and South Korea.